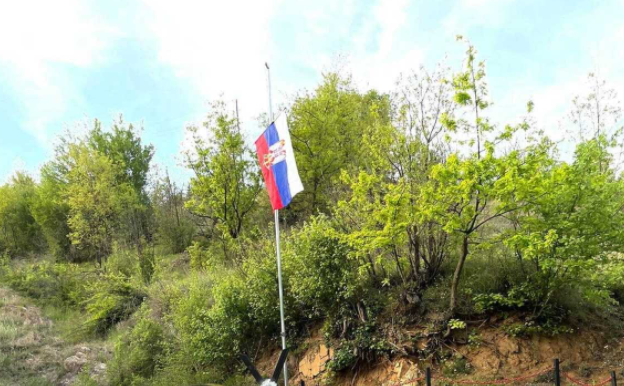 Unknown persons stained the tombstone of the first martyr of UÇPMB Fatmir Ibishi and from there they removed the Albanian flag, to place a Serbian flag.

The Albanian National Council has called this a serious and unacceptable provocation.

However, Mayor Ragmi Mustafa said that such actions are unacceptable, inciting the situation of insecurity, contempt and subjugation of Albanians in the Presevo Valley.

This is the full response:

The Albanian National Council expresses its indignation and concern regarding the cowardly acts of provocation and tension of the situation in the Presevo Valley.

Unidentified persons damaged the tombstone of the martyr UÇPMB, Fatmir Ibishi, with graffiti in the evening, and instead of the Albanian national flag, the flag of Serbia was placed at the entrance of the village of Konçul in the Municipality of Bujanovac.

It is unacceptable to incite the situation of insecurity, contempt and subjugation of the Albanians of the Presevo Valley

The reactions of the head of state on the occasion of the Tower in Trnoc and the current case in Konculj are only indicators of the dominant climate in Serbia against the Albanians of the Valley in particular.

As a product of the current system in Serbia and a consequence of the growing xenophobic discourse against minorities by politicians, media and publicly influential ministers in Serbia, they can by no means be reduced to individual expressions.

Otherwise we can not expect reactions from state institutions, which are proud of public insults to national minorities and which constantly feed xenophobic and Albanianophobic discourse.