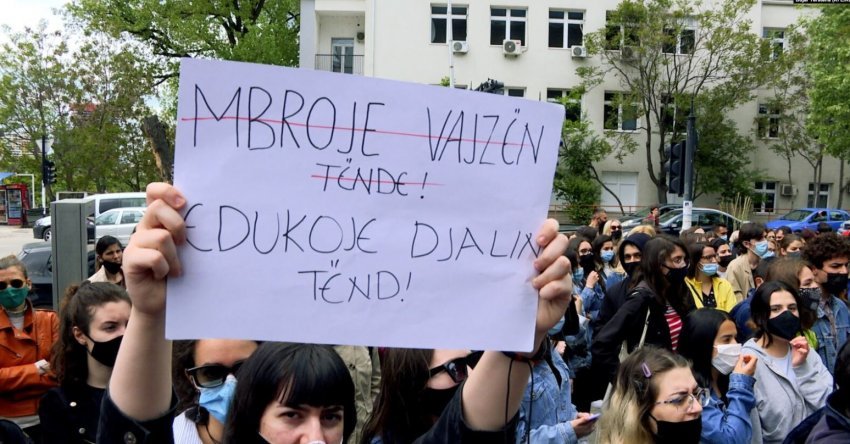 Hana from Prishtina, who graduated from the Faculty of Pedagogy at the University of Prishtina, has decided not to look for a job.

That’s because of her 12-year-old daughter and son, who is already five years old.

Hana every day sends and takes her daughter from school. She did this, as she says, for the safety of her daughter, who attends sixth grade at an elementary school in Pristina.

Hana says she is worried because while waiting in the school yard, in the spaces inside and outside the school, in some cases she has heard inappropriate words that boys have said to girls.

“I send the girl to school every day, I take care of myself, because I see a lot of irregularities in the school yard, I have seen different harassment that boys do to girls. And for this reason I send it and receive it myself “, said Hana for Radio Free Europe.

This Council, he says, has several times raised this issue with higher institutions, in order to prevent delinquent behavior and to make schools a safe environment for students. Reshitaj says that school leaders should be more careful and more engaged in preventing these phenomena.

“However, the facts on the ground prove that school principals at the national level are not even close to the level of performing their duties, as required by law. Therefore, even such cases are manifested, disturbing and hurting the souls of every parent, student and citizens in general “, added Reshitaj.

Local media in Kosovo, last week have distributed a video alleging sexual harassment of a minor by three children, in the yard of the school “Faik Konica” in Pristina.

The directorate of this school, through a press release, said that since receiving the video (on April 24), from unidentified sources, for the case in question has taken all measures inside and outside the school, notifying the parents of both parties, the Community Police, the Center for Social Work and other competent bodies, and all persons who may have been indirectly affected by the case.

The Coalition for Child Protection (KOMF) has called on the Center for Social Work to provide priority protection and rehabilitation services for the child and to undertake all necessary services for other children.

Only during this year, in the Kosovo Police, for the criminal offense “Sexual harassment” have been reported a total of 21 cases, regardless of age, said in a response to the police information office, which does not specify the cases that occurred in schools.

For a safer environment, says the Kosovo Police, mutual cooperation should be even greater, there should be exchange of information, fair and timely reporting of cases and information.

According to the Criminal Code of the Republic of Kosovo, anyone who sexually harasses another person, in particular a person who is vulnerable due to age, illness, disability, addiction, pregnancy, severe physical or mental disability, is punishable by a fine or up to imprisonment. in three years.

Mimoza Shahini, a child psychiatrist, in an interview with Radio Free Europe says the latest case has been just a bell to show a phenomenon, which is not uncommon in school settings. Even more disturbing, according to her, is the fact that there are some cases of same-sex sexual abuse.

Psychologists and pedagogues are required in schools

Hana also expresses concern about the phenomenon of sexual abuse and harassment in schools. She says that parents should educate children more about their behaviors and at the same time, the Government of Kosovo should create opportunities for every school to have pedagogues and psychologists and create a safe environment for children.

“I also have a request for schools to have psychologists, pedagogues and police officers without uniforms around the school premises because there are irresponsible children, children come from districts that are not students in the school where my daughter studies. “I have seen children with knives in their hands, I have seen negative things, but not extreme actions”, she emphasizes.

The Ministry of Education, Science and Technology, until the publication of this text, has not provided any information on how many psychologists and pedagogues there are in schools.

But, the Prime Minister of Kosovo, Albin Kurti, during the presentation of the governing program for the years 2021-2025, on Monday in the Assembly of Kosovo, said that 400 pedagogical psychologists and social workers will be employed in the framework of consolidating the psycho / pedagogical service in schools .

Taking a selfie may cause psychological dysfunction, scientists say