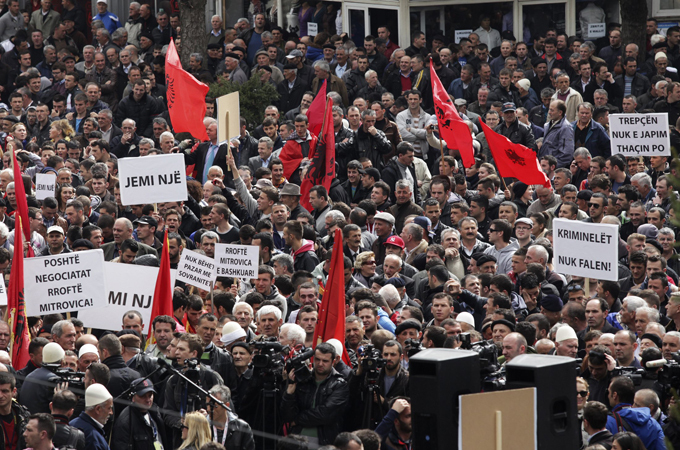 Protesters in Mitrovica raise anti-government slogans in the run-up to the meeting to decide the fate of the Serb-dominated north.

Around 2,000 ethnic Albanians took to the streets in the ethnically divided city of Mitrovica in Kosovo to protest the ongoing talks with Serbia.

“I protest against the division of Mitrovica. I am a former member of the [Kosovo] The Liberation Army and I are very unhappy with what is going on, ”said Bexhet Gashi, an ethnic Albanian.

The demonstration takes place on April 2nd ahead of a crucial meeting between Kosovar Prime Minister Hashim Thaci and his Serbian counterpart Ivica Dacic, which is expected to lead to an agreement that will also determine the future of the north of the country.

Mitrovica has often been the site of clashes between ethnic Albanians and Serbs caught between UN international peacekeepers.

The agreement, if it is reached through EU mediation in Brussels, should settle the dispute between the two former opponents.

Some ethnic Albanians believe that it will pave the way for the Serb-ruled north to join Serbia by giving local Serbs decision-making powers.

The Serbs in the region do not recognize the institutions of Kosovo, which are dominated by ethnic Albanians, and want to join Serbia.

To prevent any attempts by Kosovo to take control of the area, they blocked a main bridge with dirt.

Kosovo split from Serbia in 2008, but Serbia has pledged not to recognize the move.