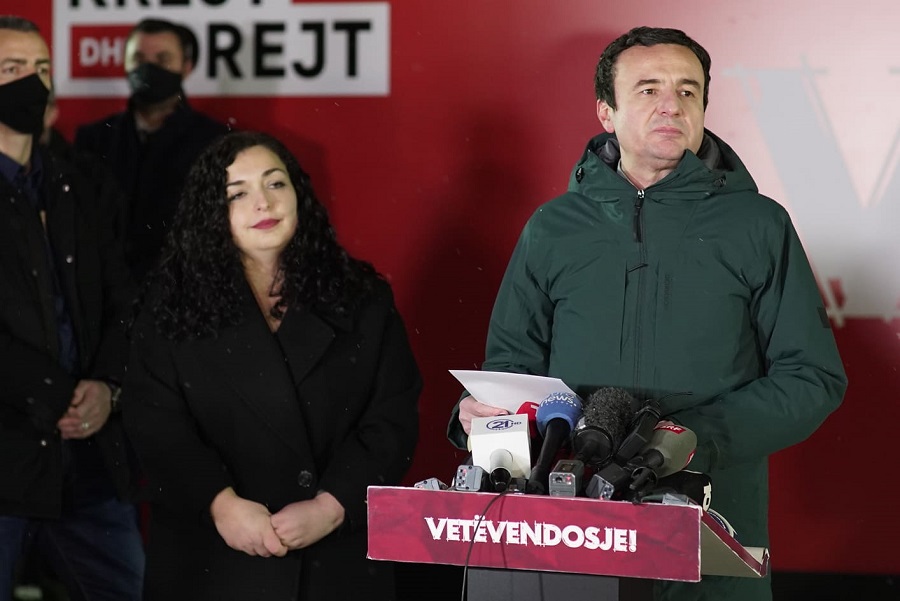 The candidate for prime minister, Albin Kurti, said that the victory of Vetëvendosje Movement in the February 14 elections will be long remembered.

He said that this day will be remembered for the long lines of citizens near the schools and for the mass voting by the diaspora.

“This victory will be remembered by generations to come as the day when the people overcome divisions, divisions and politicians. He spoke with one voice and took his destiny into his own hands. This election day will be remembered for many things, for the long lines of citizens near the schools waiting in line to vote in the winter frost. “They will be remembered for the mass voting in the post office, for the planes, buses, cars from the diaspora, and for the extraordinary support of the citizens who opened the doors of their houses and mobilized to bring about change”, declared Kurti.

The leader of the winning party said that in the next governing term they will not take revenge on anyone, but will demand responsibility and justice everywhere.

“The road ahead is long, we will have obstacles and we will make a mistake, but we have a good and noble goal and I will always be open with you and we will always argue and justify every decision. We will not retaliate against anyone, but we will hold each other accountable. So justice, no revenge. This victory is not for me nor for LVV. This is your victory, therefore change belongs to each of us. “Each of us must take the responsibility that belongs to us, to make our country a livable place for all, as it is loved by all,” he said.

The candidate for prime minister, Albin Kurti said that they will work without resentment, without corruption and for institutional and social justice.

“Without resentment, without revanchism in government, without bribes and without tribute in businesses, without corruption and nepotism in the administration, with institutional and social justice and with individual and mutual responsibility, we will develop and democratize our country. The state will be the strong social floor and the safe environmental roof that offers security and opportunities for everyone without distinction, where everyone develops his potential and talent “, said Kurti.

He was also asked if he had changed his mind about their presidential candidate.

Kurti thanked the citizens, commissioners and observers, who according to him enabled the election process with integrity, but did not leave without thanking the diaspora.

“I also thank the political opponents for a fair and incident-free race and I wish you a successful reform, because our democracy needs a genuine opposition that keeps power in control. Tomorrow begins a new day, this great victory is just the opportunity to start the change we want. We have a lot of work to do, as the country is in multiple crises “, said Kurti.

Whereas, Vjosa Osmani, VV candidate for president, said that the deep victory of her joint list with VV, should be a lesson for her former party, the Democratic League of Kosovo and other parties.

Kurti: Our priority is justice and employment, not dialogue with Serbia – Latest News