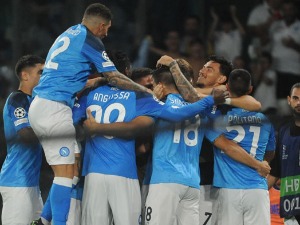 Jurgen Klopp’s team suffered a shocking defeat on the road in Naples.

“Reds” achieved only two victories in seven games played at the start of the new season.

From the very start, it could be predicted that Liverpool will not have a good time at the “Diego Armando Maradona” stadium.

The fifth minute was played when Napoli forced a penalty, which Zielinski converted into a goal.

18th minute and another penalty for the home team, only this time Alison reacts perfectly and stops Osimen.

It looked like it might wake up the visitors, but Liverpool were left with a cold shower by the end of the first half.

Anguisa scored a goal in the 31st minute for 2:0, and at the end of the first part of the match, in the 44th minute, Simeone made it a convincing 3:0.

It started badly for Liverpool in the second part as well, since Zielinski scored for the second time in the match in the 47th minute, which made Napoli 4:0.

However, it was all from the guests in this match, so Napoli registered a convincing victory at home.

In the second match of Group A, Ajax beat Rangers 4:0.