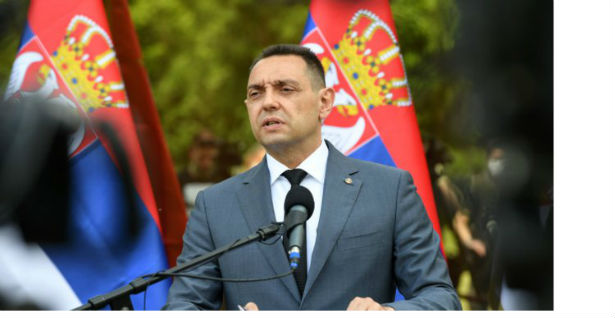 Minister Vulin pointed out that the catastrophic fires on the island of Evia would have had much more serious consequences if there were no Serbian firefighters. “Our 35 firefighters held a line of fire for over three kilometers, and where there were Serbs, no position was ever breached and the line we held never fell. Behind us are forest areas, several villages, smaller towns, which would have burned down and disappeared in the fire if there were no Serbian firefighters who held the fire position night and day, “said Minister Vulin. Where Serbs are, as he said, there were no breakthroughs and falls. “The order of the President of the Republic of Serbia, Aleksandar Vučić, has been fulfilled. We helped the Greek people and showed how much we care about our friendship, the people with whom we share religion, but above all common values, “Minister Vulin emphasized. According to him, the training and equipment of Serbian firefighters have always commanded the respect of colleagues, but the courage, perseverance and dedication they showed protecting the lives and property of the people on the island of Evia, caused great and deserved gratitude of the entire Greek people. “I am proud of all members of the Sector for Emergency Situations, and Serbia has reason to be proud of them,” said the Serbian Minister of Police. Acting Head of the Sector for Emergency Situations Luka Causic assessed that the situation on the island of Evia is currently more or less calm and emphasized that with the knowledge and courage of our people, a large part of forests and villages are protected on the part of the island where they were engaged. “The Sector for Emergency Situations is proud of all firefighters-rescuers, especially colleagues who, together with the Helicopter Unit and the medical security of the Sector for Human Resources, did a great job,” said Causic, adding that the whole of Serbia should be proud and that they should to be an example to all. Causic assessed that the firefighters engaged in extinguishing the fires in Greece have contributed to a greater reputation of the Republic of Serbia, because they are one of the most prominent among 20 teams from all over Europe. The major of the Greek fire service, Georgije Astrinakis, who is in contact with the Serbian team, pointed out that he was glad that the team of Serbian firefighters was with them and that they had a successful cooperation that gave good results. Vlado Plemić, Deputy Head of the Sector for Emergency Situations of the Directorate for Fire and Rescue Units and Civil Protection, thanked Minister Vulin for visiting the firefighters on this difficult and demanding task. “With the Greek firefighters, we managed to defend a serious line that was spreading towards Greek villages and we gained the trust of the Greeks, who gave us the authority to manage one sector and prevent the spread of fire to non-combustible areas,” said Plemić. The head of the department for the work of the specialist teams of the Sector for Emergency Situations, Davor Vidović, pointed out that the firefighters-rescuers worked on the protection of local villages on the territory of the island of Evia and the elimination of fires in several locations. “We acted on a mixed forest, mostly composed of conifers, which are up to 20 meters high and the flames rose even more than that. We managed to save all the lines and perform the tasks in the best way, “said Vidović. The Ministry of Internal Affairs also sent a medical team of the Department for Employee Health and Safety at Work with three doctors, a medical technician and an ambulance to the Greek island of Evia. Dr. Biljana Pavlović, a specialist in general medicine, stated that firefighters-rescuers were engaged in extinguishing the fire in Evia well and that there were no major interventions. “So far, we have not had major interventions that require transport to a larger health institution and further observation. There were minor interventions and minor burns, “Pavlov said

Shemi of the group “ILIRËT”, the only singer from Kosovo who will participate in the Beer Festival in Korça – Latest News