Return to the unique letter of the doc 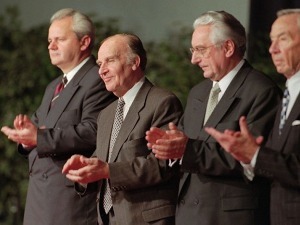 After three weeks of negotiations, from November 1 to 21, 1995, the leaders of Bosnia and Herzegovina, Croatia and the Federal Republic of Yugoslavia, with the mediation of the United States of America, reached an agreement and ended the war.

The Dayton Agreement was signed by the then presidents of Serbia, Slobodan Milošević, Alija Izetbegović of Bosnia and Herzegovina, and Franjo Tuđman of Croatia, and those countries are the guarantors of the implementation of the agreement.

The document was initialed in the presence of the then US Secretary of State Warren Christopher. Besides him, the main American mediators were Richard Holbrooke and General Wesley Clark.

It was officially signed at the Elysée Palace in Paris on December 14, 1995.

On the occasion of the anniversary of the agreement, the newly elected president of Republika Srpska, Milorad Dodik, said that together with the newly elected Serbian member of the BiH Presidency, Željko Cvijanović, he will formulate policies that will strengthen Serbia.

Dodik said that the stabilization of Republika Srpska will continue.

Željka Cvijanović said that the priority is to return to the original Dayton Agreement, bearing in mind that this document was accepted by all nations 27 years ago and that it brought a constitutional-political system that enabled the country to function in peace and that no one felt threatened.