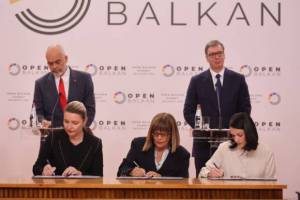 BELGRADE: Serbia, North Macedonia and Albania signed a Memorandum of Understanding on Cooperation in Film and Audiovisual Activities in the Western Balkans. The memorandum was signed in the scope of the Open Balkan initiative in Belgrade on 2 September 2022.

The signatory states have expressed their willingness to strengthen cooperation in production, promotion and public screening of film and other audiovisual works in the region, encourage co-productions and applications for film incentives.

The ceremony was attended by the leaders of Serbia, North Macedonia and Albania: President Aleksandar Vučić, Prime Minister Dimitar Kovačevski, Prime Minister Edi Rama, as well as the Prime Minister of Montenegro Dritan Abazović and the Chairman of the BiH Council of Ministers Zoran Tegeltija .