The unions demand that the minimal wage be 45,000 dinars 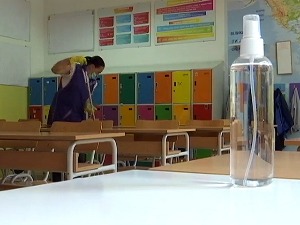 According to data from the Fiscal Council, 20 percent of employees in Serbia, about 440,000 of them, work for the unpopular minimum wage, but with illegal employees, there are many more. Their number, they say, is constantly growing because when they increase the minimum wage, employers do not increase other wages.

“As we look at the minimum wage today, we reproduce poverty. We try to ensure that the family of minimum wage workers receives as much as the poorest spend today – that’s our goal. Let’s reach the minimum consumer basket. But we don’t even succeed in that.” , says Mario Reljanović from the Center for Decent Work.

The minimum consumer basket foresees 128 dinars per month for education, and a set of textbooks costs between eight and 17 thousand dinars, while the costs of preparing students for school are much higher.

“This would mean that a family of three would need between six and 11 years to buy one set of textbooks for one child,” says Andrijana Kocić from the Alternative Center for Girls.

The European Statistical Office considers that the limit of a family’s overload is if more than 40 percent of the income goes to housing, credit and utility bills.

“By that criterion, Serbia is the only country better than Greece in the whole of Europe where these statistics are kept,” says Marko Aksentijević from the Ministry of Space organization.

We are losing a lot of money, experts say, by stimulating new residents in Serbia who earn more than 300,000 dinars, because they are exempted from 70 percent of income tax and all social insurance contributions for the next five years. They add that those who earn more than five times the average salary should be taxed additionally.

“How many tens and hundreds of billions of euros is that if we have about 35,000 people who reported to the tax administration that they earned more than that amount,” says Sarita Bradaš from the Center for Democracy.

Employers claim that they cannot increase the minimum wage by 25 percent, although last year the economy had almost 80 percent more profit than in 2020, and wage costs are significantly lower than in the European Union.

Let us remind you that the minimum wage was introduced eight years ago as a six-month aid to an employer who has problems in business. In Germany, less than five percent of employees receive it, and in neighboring Croatia, less than 10 percent of workers receive it.