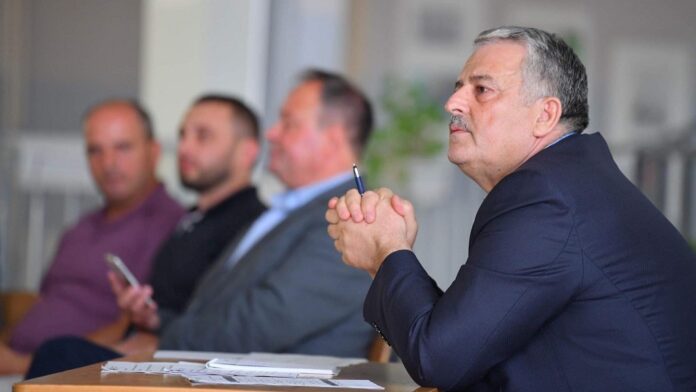 The Democratic League of Kosovo (LDK), in the meeting of the Presidency, days ago decided that Agim Veliu be fired from the head of the LDK branch in Podujeva.

Veliu reacted to this decision on Sunday.

In a post on the social network Facebook, he said that the Central Presidency of the LDK made a decision, how scandalous and contrary to the Statute of the party, after arbitrarily appointing the candidate in the race for Mayor of Podujeva in local elections and at the same time delegates to him all the competencies to lead the LDK Branch in Podujeva.

The decision for dismissal says that he was not informed but was informed through the media.

“I was initially informed through the media about the arbitrary and illegal decision of the Presidency and Mayor Abdixhiku.

Whereas, today (Sunday) I was sent the scandalous decision signed by the party chairman, which is not only known for violations of the party statute, but also for spelling mistakes, perhaps out of haste to “justify” the dismissal of the chairman as soon as possible of the Branch in Podujeva “, said Veliu.

He further accused the party chairman Lumir Abdixhiku, saying that he was playing a dirty game.

All this masquerade of President Abdixhiku and his supporters in the Presidency is nothing but a dirty game and an attempt to camouflage the decision in the name of an alleged internal reorganization (read: internal cleansing), presented in the President’s Platform. of the LDK 2021-2023 “”, he said.

According to him, although someone from the Presidency tried to deny that this illegal decision dismisses the President of the Branch, the text of the decision itself denies such political dilettantes, sitting at the table of the Presidency of the LDK.

“All competencies of leading the LDK branch in Podujeva, pass to the LDK candidate.

The candidate leads with the Presidency of the branch, the branch office and coordinates the activities with the heads of the sub-branches in the Municipality of Podujeva “, it is said in the decision signed by Abdixhiku.

“Even, with this scandalous decision, it is intended to take away the competencies, not only of the President, but also of the Branch Presidency, which is completely defactorized according to article 4 of this decision, regarding the formation of the list for municipal assembly”, says Veliu.

He further writes that such an illegitimate decision, of those who voted for him and the one who signed it, can not be called anything but a serious attack on the most successful branch in all post-war electoral processes in Kosovo.

According to Veliu, neither the LDK Presidency nor its chairman can dismiss or appoint a branch chairman elected in regular election processes by the Branch Assembly./telegraph

HOLDING A SWORD IN HIS RIGHT HAND, HIS HEART IS FLEXIBLE TOWARDS KOSOVO AND METOHIJA! The monument to Emperor Lazar, positioned on a 10.5 meter excessive pedestal, shall be ceremoniously unveiled on Vidovdan!