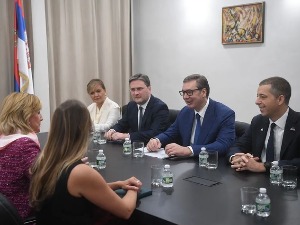 Aleksandar Vučić stated on Instagram that he discussed numerous regional and global issues with Claudia Teni.

“I thanked the congresswoman for her proactive involvement in the US Congress in areas of interest to the Republic of Serbia, as well as for the previous initiatives of importance for our country,” the post of the President of Serbia on Instagram states.

Aleksandar Vučić is participating until September 23 at the 77th session of the United Nations General Assembly in New York. He will address the General Debate of World Leaders on September 21.