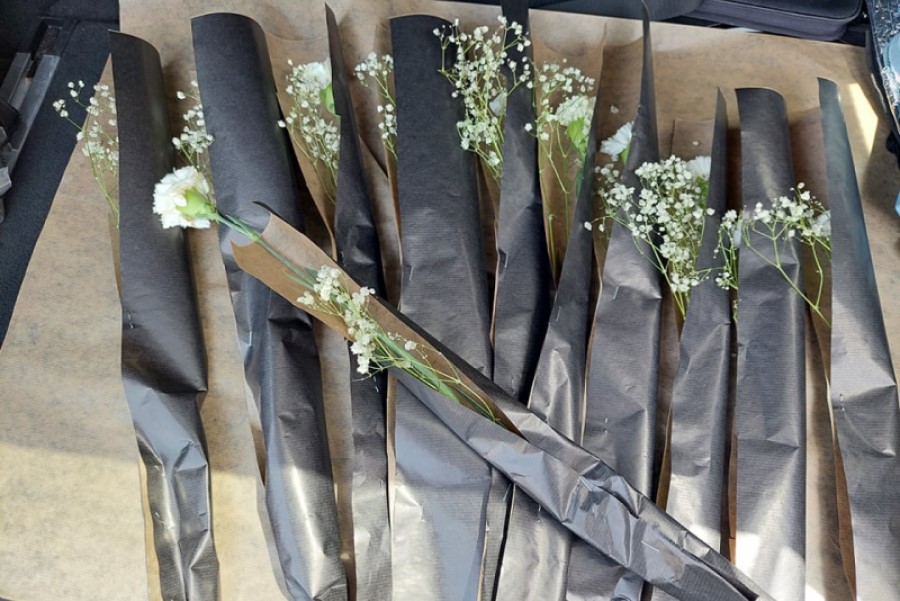 Volunteers of the group “Search-Rescue Volunteers” came out on Wednesday morning at the border crossing in Vërmicë to honor with a white carnation the dead bodies of migrants expected to arrive in Kosovo.

In the accident on Sunday (25.07.2021) in Croatia, 10 compatriots who had taken the road from Frankfurt, Germany to their loved ones in Kosovo were killed.

In their honor, the group of search and rescue volunteers have been mobilized to organize a symbolic action on the border with Albania, where the bodies of dead emigrants are expected to enter.

Arbreshë Berisha, a volunteer in the group “Volunteers Search – Rescue”, tells KosovaPress that upon receiving the news that the bodies of migrants who died in Sunday’s accident in Croatia will come to Kosovo on Wednesday morning, they were organized in their honor.

“Last night we realized that the corpses of the tragedy that happened in Croatia will arrive today and we asked the citizens that anyone who wants to join us with a symbolism, with which we will honor the dead bodies, with a white carnation t “We say goodbye to him,” she said.

She wishes that the families of those who lost their lives get over the great pain for their loved ones as easily as possible, while wishing that such accidents never happen again.

“Family members can pass this pain of the injured as soon as possible and recover quickly. “We hope that there will be no more cases like this that happened recently”, she says.

As for the organization, she announced that they had no problems, as she warns of another action.

“We have not had any problems[…]”It was also an initiative to clean me, because as seen on camera, it is an unclean place, but this remains for the next few days”, she says.

The bodies of the emigrants who lost their lives in the tragic action on Sunday morning in Croatia are expected to arrive in Kosovo today. Meanwhile, it is still unknown whether they will be sent to the morgue in Prishtina or to their families for burial.

Minister Vulin: Whereas Aleksandar Vučić leads Serbia, Srpska will all the time have the assist and assist of the Republic of Serbia