A person in Chicago was killed whereas attempting to arrest 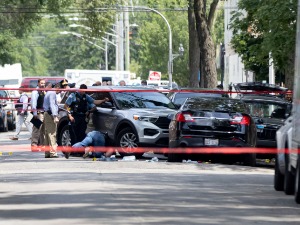 Chicago Police Chief David Brown said that the members of the unit for catching refugees, in cooperation with the American marshals, tried to hand over an arrest warrant to a man who was charged with a severe sexual assault with the use of firearms and violation of electronic surveillance.

The suspect who was in the car did not want to go outside on the order of the policeman, but pulled a gun on them.

Police spokesman Tom Ahern said that a gun was found at the scene of the incident, but that it is still under investigation whether the suspect used the weapon.

According to the Chicago Tribune, three Chicago police officers and an American marshal fired shots at the suspect.

The man was transported to Mount Sinai Medical Center in “serious condition”, but he suffered injuries.