After the marathon, Barty beat Plišková and gained Wimbledon 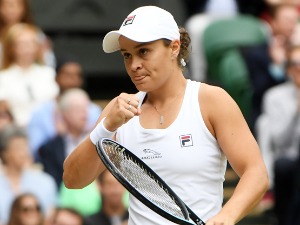 The first favorite of the tournament and the first player in the world justified that role. After a great fight in three sets, she managed to beat the great Czech. The Australian easily decided the first set in her favor. The second, after a great fight and reversal, was won by Pliškova in the tie-break. In the deciding set, Barty was better and deservedly reached the title.

Bartie’s strong start, she won the first three games without losing a point, and with another break she reached a great 4-0 in the first set. Pliskova somehow managed to answer. She returned one break, but did not manage to keep her serve. With a new break, Barty took the lead with 5: 1.

Pliškova fought back, won the next two games and came to 5: 3. However, the Australian kept her serve and solved the first set – 6: 3.

Great fight in the second set. Again, Barty was the first to reach the advantage break. However, in the sixth game, Pliškova took the service away from the opponents, then she was confident on her own and took the lead 4: 3.

In the eleventh game, Pliškova dropped 40: 0 on her serve, Barty turned it around with a patient game and took the serve away from her.

When the Australian was expected to certify the victory with a serve, a reversal followed. Pliškova manages to prolong the match, took the service away from Bartijeva and introduced the set in the tie-break. The Czech was convincing and won this period with 7: 4.

In the deciding set, Barty gained a break advantage at the start and quickly took the lead with 3: 0. Pliškova tried to fight back, but did not use her chances. The Australian kept the acquired advantage until the end of the set – 6: 3.

In the morning, during the day or at dinner? Find out when is the right time to drink lemon water – Latest News