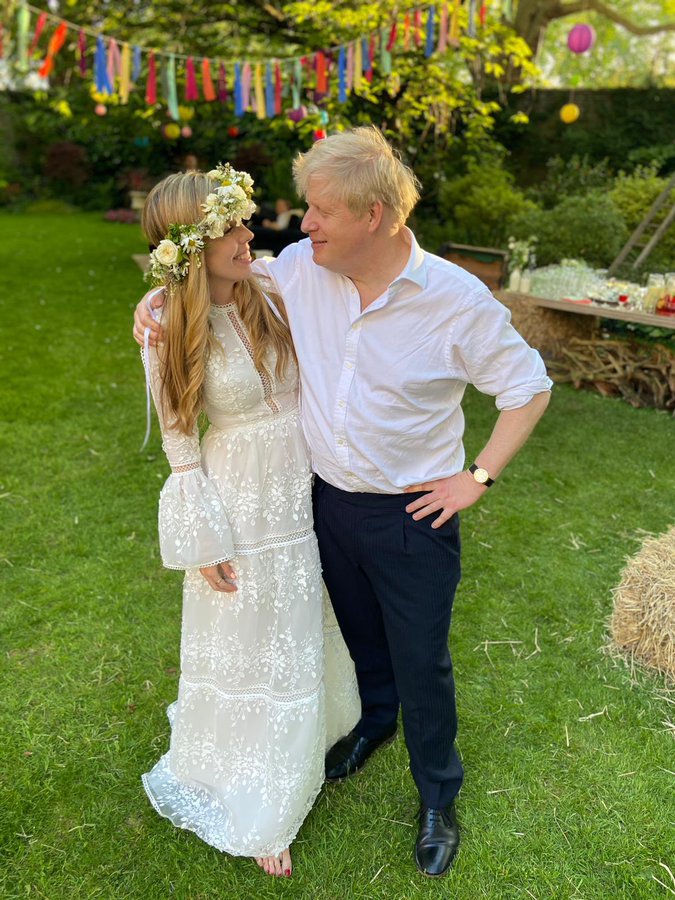 The wedding took place in a “small ceremony” on Saturday afternoon, a Downing Street spokesman said.

The spokesman added that the couple would be celebrating again with family and friends next summer, with their honeymoon also delayed until then.

The Prime Minister has already returned to work. He is the first prime minister to marry while in office in nearly 200 years.

The Mail on Sunday reported that 30 guests were invited to the ceremony in a brief announcement – the maximum attendance allowed under COVID restrictions in England.

A small number of church officials were involved in the preparations for the Catholic ceremony, which was led by Father Daniel Humphreys.

Johnson, 56, likes to avoid talking about his private life – he has refused to answer questions on the subject in recent years.

Only one official photo has been released – a day after the wedding – showing the couple in the garden at 10 Downing Street in the hours after the ceremony.

Conservative MP James Cleverly, however, shared various photos of the newlyweds enjoying the garden reception in the Saturday sun, with decorations and a refreshment table visible in the background.

Downing Street did not disclose any details of who was invited and whether any of Johnson’s cabinet colleagues were among the guests.

“Many congratulations to Boris Johnson and Carrie Symonds. Wishing you both a lot of love and happiness, “Patel wrote on Twitter.

Symonds’s wedding dress was created by Christos Costarellos, who studied at London Fashion College and describes his work as “inspired by the spirit of ancient Greek philosophy”.

The last British Prime Minister to marry while in office was Robert Banks Jenkinson in 1822.

Ms. Johnson worked in the Conservative Party press office, which she joined in 2010. She became the party’s communications chief before leaving in 2018 to work in public relations for the organization on the conservation of the seas, Oceana.

The couple got engaged in early 2019 and in February 2020, they discovered that they were engaged and that she was pregnant. Their son, Wilfred, was born last April.

Johnson and his ex-wife, Marina Wheeler, announced in 2018 that they were divorced after 25 years of marriage.

RHMZ ON THE YELLOW METEO ALARM! Showers and thunderstorms are coming, the entire of Serbia can be UNDER IMPACT!

The head of the Institute for European Affairs is threatened with death, they call him a lobbyist for “Greater Albania” – Latest News