BOYCOTT IS A DISTENT PAST FOR THE OPPOSITION They go to the elections in Belgrade in 4 or 5 columns, however not essentially the checklist 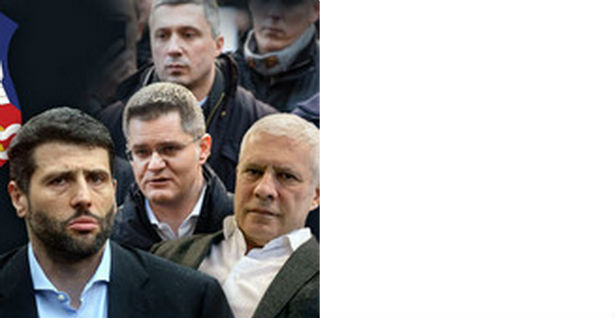 BOYCOTT IS A DISTENT PAST FOR THE OPPOSITION They go to the elections in Belgrade in four or five columns, but not necessarily the list

Among the opposition parties that have not yet revealed to the public their plans to run in the Belgrade elections, there are currently four to five different columns of organizations that could cooperate in some kind of joint campaign, not necessarily appear on joint lists.

While the ruling Serbian Progressive Party, as well as some smaller opposition coalitions, such as “NADA”, are clearly announcing the start of the campaign for the Belgrade elections, as Danas reports, the rest of the opposition is still “redistributing” and grouping in several columns.

One of the columns could be the one recently summoned by Dragan Djilas, the leader of the Party of Freedom and Justice, who said that he was in favor of “a single Belgrade list” of the entire opposition that is against Vucic.

He specified that this includes the SAA, DS, PZP, NDBG, ZZS of Nebojsa Zelenovic, NS and SDS of Boris Tadic, as well as that non-party personalities would be on such a list.

Some of the parties mentioned here have already formalized cooperation. The SAA and the PZP are already part of the same parliamentary group in the Belgrade Assembly, and in most political activities they act jointly with the Democratic Party.

For now, the New Party and the Office for Local and Innovative Policies (KLIP), founded by Marko Bastać, former president of the municipality of Stari grad, have official cooperation.

This group could be part of a column that will include Boris Tadic’s Social Democratic Party (SDS), with which Nova is cooperating at several levels – around the platform on election conditions in negotiations before higher-level MEPs, but also at the local level, in to the assembly of the Belgrade municipality of Vracar, where SDS and Nova form a committee group.

Although a joint appearance at the Belgrade elections seems to be a logical extension of this cooperation, so far there have been no official announcements of that type.

The No Drowning Belgrade Initiative, on the other hand, although seen as part of a broader opposition column proposed by Djilas, has so far in its deliberations to run in the Belgrade elections seem to be planning to run independently, possibly associated with some smaller local groups and movements. they do not rule out the possibility of joining one of the coalitions after the elections.

Therefore, it seems that they could form another independent column.

On a broader level, they had close cooperation with Nebojsa Zelenovic, especially through the green policy platform “Action” launched by Zelenovic, supported by the NDBG as well as more than 20 local organizations and movements.

One of the organizations that cooperate with Zelenović and Let’s Not Drown Belgrade in this way is the citizens’ association “Srce grada”, which has a committee group in the municipality of Stari Grad, led by Đorđe Miketić.

Going to the Belgrade elections together would be a logical continuation of this cooperation, although there have been no official announcements for such a thing yet.

And Yellow in a separate column

A special column in Belgrade could be led by environmental activist Aleksandar Jovanović Ćuta from the movement “Let’s Defend the Rivers of Stara Planina”, who announced the formation of a political movement at the end of June with which he will run in the Belgrade elections.

There is an open possibility for Ćuti, or some other larger group, to join other groups of citizens, such as the political platform “Solidarity”, whose representatives recently spoke at a tribune with members of ORSP, NDBG and Zelenović’s platform “Akcija” about the need to unite the opposition.

If the People’s Party decides to go to the Belgrade elections, it will most likely form a separate column, possibly with the support of smaller associations of citizens and movements such as the Free Serbia Movement, with which it is still cooperating.

Opportunities for cooperation between the People’s Party and some other, larger columns in the opposition, such as the one made up of their partners from the former SZS or the United Opposition of Serbia, would not be possible, as People’s Party officials have repeatedly pointed out. the column found some of the movements that had not boycotted the previous elections.

Most of the previously mentioned organizations conditioned their participation in Belgrade, and all other levels of elections, with the outcome of the dialogue between the government and the opposition on the election conditions. Only after the end of the dialogue will it be possible to talk more about possible joint appearances and lists.

One of the few among the opposition that announced the start of the campaign for the elections in Belgrade in early July, is the coalition “NADA” gathered around the Democratic Party of Serbia (DSS) and the Movement for the Reconstruction of the Kingdom of Serbia (POKS).

Announcing the start of the campaign, DSS President Milos Jovanovic and POKS presidency member Dusan Radosavljevic said they would “visit all parts of the capital”, and after that pre-election activities will continue throughout Serbia “by entering every place”.

Also, the candidacy of Milos Jovanovic for the president of Serbia in front of this coalition was announced.