By way of the Regional Program, one other 20 households in Krusevac completely resolved the housing concern 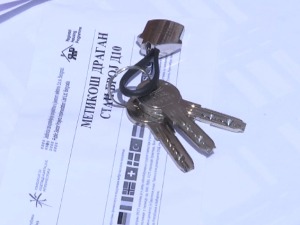 29 years ago, Rajka and Dragomir Komlenović escaped from Gorazde with their two children. After Šabac and Stara Pazova, they found permanent refuge in Kruševac, where as of today they have their own roof over their heads and a permanent address.

“We have been tenants all the time until today. We are very satisfied. We hope that in this home, God willing, the children will create their own families and that my grandchildren will walk around this apartment, that there will be as many of us as possible,” says Rajka Komlenović.

The first 40 apartments in two residential buildings intended for refugees in Krusevac were moved in last year, and today another 20 families received the keys thanks to the Regional Housing Program and the city, which provided 2,100,000 euros.

“I am deeply convinced that the refugee chapter as far as Krusevac is concerned is over, 496 permanent solutions, of which 120 apartments, 300 construction materials, about fifty rural houses, some prefabricated houses, so four maybe so we can reach 500 solutions in this city “, says Vladimir Cucic, Commissioner for Refugees and Migration.

Thanks to donor funds through the Regional Housing Program, 5,500 most endangered families in Serbia have been taken care of so far.

“The European Union is strongly committed to the common goal it is working with Serbia to provide permanent housing solutions to the remaining refugees from the wars in Yugoslavia. With 236 million euros, the EU is the largest donor to the Regional Housing Program,” said Marcelo Repici, president of the EU Delegation to Serbia.

Last year alone, despite the pandemic, 2,070 families received permanent housing solutions through this program, and as many more are expected to be taken care of by the end of this one.

EVERYTHING HAPPENED IN A SECOND, HAPPINESS SO THERE WERE NO CHILDREN! A swimmer who…