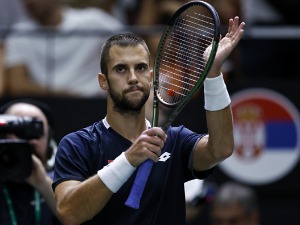 Đere thus joined Novak Djokovic, who will also participate in this tournament. Laszlo needed 85 minutes to break the resistance of the Turk, who put up a strong resistance, reached several breaks, but our tennis player managed to make one more in both sets and reach a well-deserved victory.

Great fight in the first set. Already at the start of the match, the tennis players exchanged one break each. In the middle of this period, another exchange of breaks and the result was 3:3. Then our tennis player ties three games, with two breaks, and wins the first set with 6:3.

Similar picture in the second set. The merciless fight continued. Djere managed to take away his rival’s serve in the fourth game, who returned the favor in the seventh game. In the ninth game, the Turk misses two tied break opportunities, and in the next game, Laszlo takes away the rival’s serve and thus puts an end to the set and the match – 6:4 in the second set.

The Nur Sultan tournament starts on Monday. The best Serbian tennis player Novak Djokovic will play against the Chilean Christian Garin at the start of the tournament in Astana. Đere will find out his rival in the first round during the day, while Miomir Kecmanović meets Yoshihito Nishioka.

The extremely strong 500 Series tournament runs from October 3rd to October 9th for a prize pool of $2.05 million.