“Eagles” within the temper, Serbia is convincingly main in opposition to Mexico 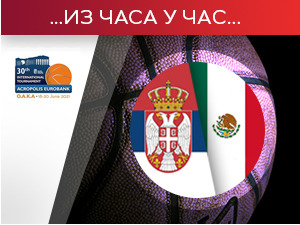 16 ‘Serbia repulses the onslaught of rivals, the advantage grows again

The Mexicans tied six points and got closer, but Serbia repulsed that attack of the rival. Now Marjanović was the first option in the attack and the “eagles” went on 40:26.

14 ‘Petrushev unstoppable under the basket

The center of Mege and the best player in the ABA league has dominated since he entered the game. The guards can’t match him, he has already scored eight points and the result is 34:23.

Milosavljevic opens the second section with points from a distance. Serbia increases its advantage to 29:20.

The table has already scored two triples, the Mexicans keep the connection with a shot from a distance. However, with the entry of Petrushev, Serbia gained explosiveness under the basket and after his points, the advantage is five differences (21:16).

5 ‘Shooters in the mood from the first minute

Triples “rain” on both sides – Andjusic for Serbia, but then Mendes returns and the result is 16:13.

3 ‘Effective start to the match

Boban Marjanović opened the match with a miss, but in the next attack he hit with a foul and annulled the triple of the Mexicans. He was joined by Stefan Jović, who tied seven points, Dobrić also helped with a triple, so Serbia went to 13:10.

Serbia continues preparations for the Olympic qualifying tournament, and after the triumph over Puerto Rico, a duel with the Mexicans follows.

Igor Kokoškov’s team defeated Puerto Rico 80:68 in the first match, while in the last, on Sunday at 19, they will play with the host Greece.