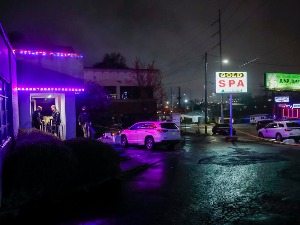 The two shootings occurred in two massage parlors in the city of Atlanta, and one happened in the suburbs of that city, according to American media.

The suspect, a 21-year-old man, was taken into custody, police said.

The attacks began at around 5 pm local time, when five people were shot in a massage parlor, about 50 kilometers from Atlanta, according to the AP.

According to CNN, two people were pronounced dead on the spot, and three were taken to the hospital, where two died, said the spokesman of the Cherokee County Sheriff’s Office, Jay Baker.

Atlanta police said they responded to a call that a robbery was underway in a massage parlor, where they found three bodies.

While in that salon, the police received a call that there was another shooting in the massage center, which is located in the street across the street, where they found another body, stated the chief of police in Atlanta, Rodney Bryant.

He added that the four victims were women and that it seemed to be Asian women, and pointed out that it was too early to say about their connection with these massage centers.