Evacuation from Afghanistan – a exceptional success 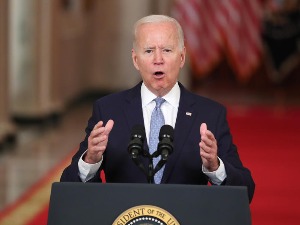 Addressing the nation, President Biden said he was taking responsibility for the decision to withdraw from Afghanistan, adding that keeping US troops in that country was not an option.

“I take responsibility for the decision. Now some say that we should have started mass evacuations earlier and carried out in a better organized way. With respect, I do not agree with that,” Biden said.

He stated that the departure on August 31 was determined in order to save human lives, and that it was not an arbitrary deadline, Reuters reported.

“This is how the mission is conceived. It is designed to act under severe stress and attack, and that is what has been done,” Biden said.

Biden paid tribute to members of the military who were engaged in the evacuation, including 13 who died in the terrorist attack, and praised those who completed the mission.

He criticized the inability of the expelled Afghan government to defend itself from Taliban attacks, which forced the United States and NATO allies to leave quickly and humiliatingly, and underlined the role of former President Trump.

He pointed out that the biggest influence of the Taliban since 2001 was influenced by the fact that Trump agreed to release 5,000 prisoners last year, among whom were Taliban commanders, many of whom took control of the rebels.

U.S. officials believe that between 100 and 200 Americans remain in Afghanistan, and Biden stated that some of them intend to leave the country. He added that most of them have dual citizenship and have lived in Afghanistan for a long time.

Democrats Say Abortion Is on the Line in Recall Election. But Rolling Back Rights Wouldn’t Be Easy.