Everyone seems to be competing for a match; Marakana is a particular emotion, Marakana is life 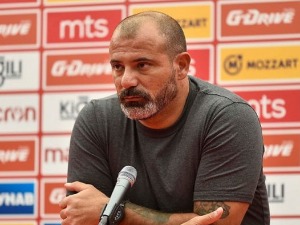 “We rested, we worked quite well during this period. We had representatives who returned successfully, you know what the situation is because of the crown, it changes from day to day, but everyone managed to return.”

“We will see how rested they are, but in any case we have players who are ready to run tomorrow,” Stankovic said at the press conference.

Stanković was asked how good the game in the match against Čukarički is as a signpost and how much the duel with Proleter is a dress rehearsal for what follows.

“It is certain that a good game and a good result are penicillin for everyone, especially for self-confidence and for the head. In the end, it didn’t matter how we played, nice or ugly, it was just important to bring points home. The game on Banovo brdo was a nice indicator how the team should look from the first to the last minute. “

“We worked during this break, the backbone of the team remained in Belgrade and we worked on some details. We always say that we play against a low block in the championship and a good opening of the game gives you the advantage to be calmer and then play flutter and more beautiful.” We scored the goal in the previous round before the end of the first half, we created a lot of chances and we didn’t give up, it really looked phenomenal and we will strive for that, “said Stanković.

“Everyone is competing for tomorrow’s game, we have no problems with injuries, we can have problems with fatigue, and the fact how the players will feel after a hard journey. First of all, I mean Degenek, Borjan, Kangu, Ben. Borjan arrived last, a little earlier. Ben, if he is tired, we have Popović and Gordić and they are 100% ready to score at any moment “, said Stanković.

The head of the professional staff of the red and whites also spoke about the guy who arrived as the last reinforcement, Risair Zivkovic.

“Every player who comes to the Red Star gets praise and should get praise. It’s up to him how he will respond on the field and withstand the pressure of a big club like the Red Star. It’s not easy, not everyone fits quickly into this system, the size club and this pressure. “

“The goal we set is big, not everyone can fit in 10-15 days, it takes time. I am glad that Risairo came right after Cukaricki, we had time, ten days to go through the whole training process, as if it were He was a talented, fast, good player who will bring us something new, everything else is up to him. “

“He needs to be calm, to fit into the system, for the players to love him because of his work and effort, as well as his attitude towards the jersey, the Red Star fan will recognize that immediately. I expect him to continue to show the same attitude in training, professionalism that is truly phenomenal on his part and there is no doubt that he can only bring us good. “

Stanković used the opportunity to remember the moments that remained in his fondest memory on the occasion of marking the 58th birthday of the “Rajko Mitić” stadium.

“I may have experienced it a little more in Romania, but I’m glad about it. The audience has finally returned after all the troubles around the coronavirus, Maracana is a special emotion and Maracana is life.”

Deki also commented on the results of the Serbian national team.

“I am honored to talk about the national team, as someone who was the captain and passed all the selections, I think that the Serbian national team played” hell “football, we looked powerful and dominant from the first to the last minute.”

“I’m sorry for that goal, maybe we could have just conceded a goal, given it to ourselves. I didn’t see that anyone could have endangered us. With such an attitude, approach and game as it was in Dublin, the national team with all his strength, he can hope to be the first in the group and go directly to the World Cup. If that doesn’t happen, Serbia deserves a place in the World Cup in a barrage with a game like this. “

The head of Zvezda’s professional staff also referred to the scouting of opponents, but he also spoke about the transition period.

“As far as the transition period is concerned, it is realistically over for us as far as arrivals are concerned, it is now up to us to show how much we can and what we can do, I believe in the team a thousand percent, let’s move on,” concluded Stanković.