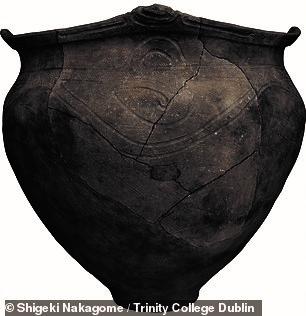 Modern Japanese populations are descended from three ancient cultures – and not just two, as previously thought – has been determined by a new genetic analysis.

While the Japanese archipelago has been occupied by humans for at least 38,000 years, Japan has undergone rapid transformations in just the last 3,000 years.

These saw shifts from food search, to wet rice farming, and to the development of a technologically advanced imperial state.

It was thought that today’s Japanese populations are descended from the indigenous hunter-gatherers-fishermen Jomon and the Yayoi farmers who came later.

Researchers led by Trinity College Dublin, Ireland studied 12 ancient genomes listed from the bones of people who lived before and after the farming period.

This revealed a second, subsequent influx of East Asian descent during the Kofun imperial period from 300–710 AD, when political centralization emerged in Japan.

These findings are supported by several lines of archaeological evidence for the introduction of new, large settlements in Japan in this period, the team noted.

According to the team, the advent of agriculture is usually accompanied by population replacement.

This is the case for the Neolithic migration to most of Europe, with only minimal contributions observed by collecting hunter populations.

The researcher’s genetic evidence, however, shows that this was not the case in Japan.

Instead of substitution, the shift to agriculture saw a process of assimilation between indigenous Yomon and young Yayoi rice farmers.

The team analysis also determined that Jomon had a small population of about 1,000 people of several millennia, moving away from continental populations about 20,000-15,000 years ago.

During this period, Japan became increasingly isolated as sea levels rose, removing the connection to the Korean Peninsula established about 28,000 years ago at the beginning of the Last Glacial Maximum.

The expansion of the Korean Strait 16,000-17,000 years ago coincides with the oldest evidence of Jomon pottery production.

“The Jomon indigenous people had their unique lifestyle and culture within Japan for thousands of years before adopting rice farming during the subsequent Yayoi period,” said population geneticist Niall Cooke of Trinity.

“Our analysis clearly reveals that they are a genetically distinct population with an extremely high affinity among all the individuals in the sample – even those that vary in age from thousands of years and have been excavated from places on different islands. “These results strongly suggest a prolonged period of isolation from the rest of the continent,” he explained.

“The Japanese archipelago is a particularly interesting part of the world to investigate using a time series of ancient specimens,” said study author and population geneticist Dan Bradley, also from Trinity College. The reason for this, he explained, is “Japan’s extraordinary prehistory of long continuity, followed by rapid cultural transformations.”

“Our observations on the complex origins of modern-day Japanese show once again the power of ancient genomics to uncover new information about human prehistory that could not be seen otherwise,” he concluded.

The full findings of the study were published in the journal Science Advances.

Four major studies in recent times have changed the way we view our ancestral history.

After analyzing DNA from 142 populations worldwide, researchers conclude that all modern humans living today can trace their ancestry to a single group that appeared in Africa 200,000 years ago.

They also found that all non-Africans appear to be descended from a single group that split from the ancestors of African hunter-gatherers about 130,000 years ago.

The study also shows how people seem to have formed isolated groups within Africa with continental populations splitting from each other.

It examined 483 genomes from 148 populations worldwide to examine the expansion of Homo sapiens outside Africa.

They found that indigenous populations in modern Papua New Guinea owe two percent of their genome to an already extinct group of Homo sapiens.

This suggests that there was a distinct wave of human migration from Africa about 120,000 years ago.

Using genomes from 83 Aboriginal Australians and 25 Papuans from New Guinea, this study examined the genetic origins of these early Pacific populations.

These groups are thought to be descended from some of the first people to leave Africa and has raised questions about whether their ancestors were from an earlier wave of migration than the rest of the European-Asian.

The new study found that the ancestors of modern Aboriginal Australians and Papuans split from Europeans and Asians about 58,000 years ago, following a single migration from Africa. These two populations themselves changed later about 37,000 years ago, long before the physical partition of Australia and New Guinea about 10,000 years ago.

Researchers at the University of Hawaii at Manoa used one of the first integrated computer models of climate-human migration to recreate the spread of Homo sapiens over the past 125,000 years.

The model simulates ice ages, instantaneous climate change, and captures the time of arrival of Homo sapiens in the Eastern Mediterranean, the Arabian Peninsula, South China, and Australia in accordance with paleoclimatic reconstructions and fossil and archaeological evidence.

It was discovered that modern humans seem to have left Africa 100,000 years ago in a series of slow-moving migration waves.

They estimate that Homo sapiens first arrived in Southern Europe about 80,000-90,000 years ago, much earlier than previously thought.

The results challenge traditional patterns that suggest there was a single exodus from Africa about 60,000 years ago.