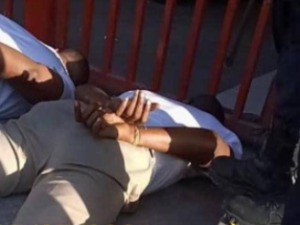 It took only 24 hours for the police in Haiti to catch the first two alleged participants in the assassination of President Jovanel Moiz, who was killed on Wednesday at his residence in Port-au-Prince.

“Police have arrested the alleged killers of President Moise,” Haiti’s Secretary of State for Communications, Franz Exantus, wrote on Twitter.

Judging by the photos published by the government officials in Port-au-Prince immediately after the arrest, the police caught two people, whose identity is still unknown.

The police action was carried out after the Haitian authorities declared a state of emergency in Haiti and closed the airport.

Haitian Prime Minister Claude Joseph blamed the attack on “foreigners”, who communicated with each other in English and Spanish, stating that an armed group came down from the surrounding hills about an hour after midnight and stormed the president’s residence.

The president’s wife was also wounded in the attack, and she was transferred to Miami for treatment in a serious condition.

The attack came after years of protests against Moiz’s government and demands for his resignation, but it is still unknown who the perpetrators of the attack are, although local media claim that the mafia boss, a former police officer who managed to unite several rival groups into a single organization .

Moiz has been president of Haiti since February 2017, and in the last few years he has been the target of sharp protests by the opposition, which has accused him of corruption, intimidation and assassination of political rivals.