I Climbed the cliff with my fingers and head, I COULDN’T MOVE MY FEET! I FELL UNCONSCIOUSLY FROM THE PAIN! A dramatic confession by Ivan, who spent 42 hours in an abyss eight meters deep! Video 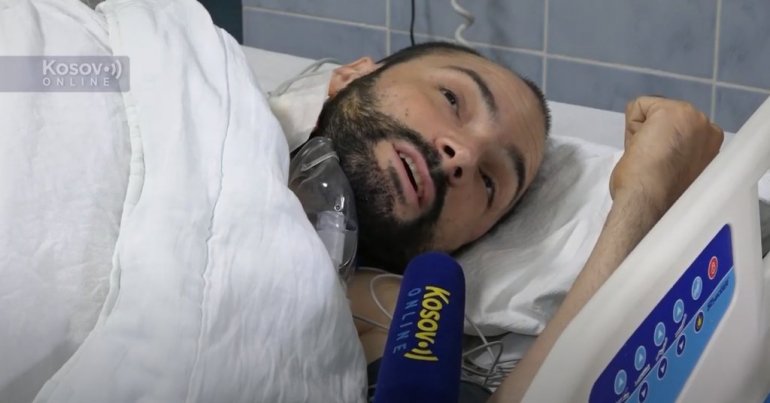 Ivan revealed the details of the drama he survived from his hospital bed. Ivan is currently successfully recovering from the severe injuries sustained in the accident at the Intensive Care Unit of the KBC in North Mitrovica.

His intention to spend a few days on Lake Ohrid, but also on the sea in Greece, where he planned to visit his friends in Gracanica and North Mitrovica in passing, was interrupted on Friday at around 3 pm, when he experienced in Dudin Krš near North Mitrovica an accident which, he says, he himself does not know how it came about.

– I do not remember the accident itself, nor the situation that led to it. The only thing I remember in the short pictures is that I tumbled out of the road and ended up in a trench. I don’t remember any incident, which I always managed to successfully avoid before. So I doubt I fell asleep behind the wheel – begins his unusual story, biker Ivan Milosevic.

In a trench eight meters deep

He adds that the next moment he remembers was his waking up under the engine and the feeling of pain in his whole body.

– At the beginning, I wasn’t sure if I really had an accident or I was just dreaming, but the next moment I saw that I was entangled under the engine, which, fortunately, was not with its weight on me, because it was leaning on two nearby rocks. I knew that I had to pull myself out from under it so that I could breathe, and that my extraction, due to injuries in my whole body, lasted for a whole two hours. Due to fatigue and pain, I fell unconscious or asleep again, I don’t know exactly, and that must have lasted for an hour or two, until I regained consciousness. Then I heard certain voices of people in the distance, who unfortunately could not see me. I tried to gather strength and breath to shout “help”, but no one heard my attempt, so the only way for me to survive was to get out of the trench seven, eight meters deep and drag it through the thickets to the road I was from. and landed – says Milosevic.

To make the accident worse, a mobile phone fell out of his hands, which kept ringing, but he could not reach it due to the injuries he sustained. After a couple of hours, when the battery ran out, the phone, he says, went silent, which was another aggravating circumstance in finding it.

Struggle for life and quest

The fight for life and injuries from the accident are visible on the body of this cheerful young man who, as he says, initially had no doubt that he would survive, but as hours and days passed, his strength and faith that he would be found slowly disappeared.

Family and friends announced the news of his disappearance on Saturday, and the police and EULEX were informed. An extensive search has begun.

– At first I had no doubt that I would be saved, because I knew they were looking for me, but dehydration was what I was afraid of. That morning before breakfast I had breakfast and nothing after that I ate or drank. Still, I managed to endure that whole day, night, the next day and the next night, but already on the third day, the dehydration started to take off. I was less and less able to climb the cliff along which I relied on the help of my fingers and head, because I could not move my hips and knees off the ground due to the injuries I suffered. I moved 20, 30 centimeters and fell unconscious again from helplessness and pain. And so for three days – says Ivan.

“I didn’t believe anyone would arrive”

He states that, after more than 40 hours spent in a ditch with severe injuries, he still started thinking about the worst outcome that could happen to him, death.

– On the third day, I began to doubt whether anyone would find me, and I began to think what it was like to die of dehydration. I didn’t believe that anyone would be able to find me while I was still alive. Still, I did not completely lose hope, I did my best, but as time passed, so did my strength and the question arose whether I would succeed – Milosevic remembers in disbelief.

However, thanks to his friends from Gracanica, bikers from Mitrovica and people of good will, Ivan was found on Sunday morning, and that, as he says, unreal moment, according to his own confession, he will remember forever.

– That was unreal. With great difficulty I was climbing those 10, 15 centimeters along the cliff, when I heard voices that were getting closer. The call “Ivan, are you there?” Followed, after which I realized that I was saved and that my only task was to stay there and not slip back into the ditch. Now I can say that they came quite quickly since they had no knowledge of where I was and thank them once again for saving me – says Milosevic.

Treatment at the best level

He also has words of praise for the medical staff of the KBC in North Mitrovica, where, as he says, the treatment is at the highest possible level and the treatment of the staff is even closer than the profession requires.

– It is known that Serbs from Kosovo cultivate special emotions towards us who come from central Serbia, and that is why all of us who come here feel very comfortable. We went through all the analyzes on the first day, we did the things that were needed and now I am recovering as fast as possible in the situation I am in. – Milosevic concluded.

The head of the Department of Anesthesiology, Dr. Milena Cvetković, confirmed for Kosovo online that his health condition is stable despite the serious injuries he suffered.

– The current condition of the patient is stable for now. We will do additional diagnostic methods, such as a head scanner, to see in what situation the small hematoma is now, that is, the bleeding that took place. We will also check the chest again, and for now everything is going well, the bone fractures are stable for now and the patient is in good general condition, aware, oriented and has no major problems, despite the fact that the injuries are severe and life-threatening. – said Dr. Cvetković.