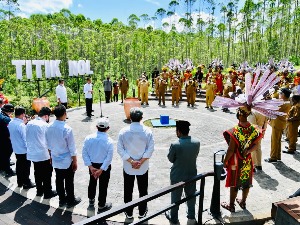 At the end of last month, the Indonesian authorities signed contracts for 19 projects that make up the first phase of the plan to build the new capital, which should cover about two and a half thousand square kilometers and cost a little more than 30 billion US dollars. Thus, after some delay due to vaccination against the new corona virus, the construction of the new administrative heart of the state, which should employ around 150,000 workers, has officially begun.

The new capital of Indonesia, called Nusantara, which literally means “archipelago”, should be located on the east coast of the island of Borneo (Kalimantan), as much as 2,000 kilometers away from the current capital, Jakarta. In addition to government buildings and foreign embassies, it will contain hospitals, a university, a congress complex, several scientific institutes, shopping centers, residential blocks, gardens and plantations for food production and military barracks, and a new airport will be built near it.

Borneo, which Indonesia shares with Malaysia and Brunei, is one of the least developed parts of the country, an island known for its jungles with unique animal and plant life, especially for its population of orangutans and large carnivorous flowers, as well as numerous tribal communities, which for the past few centuries have attracted great attention of anthropologists.

Indonesian citizens, however, in recent months, in public opinion polls, express increasing opposition to the project to build a new capital (which now stands at close to 45 percent), because it requires large investments, and according to them, it is not a priority task for the state, considering the economic consequences left by the pandemic covid-19 and the uncertainty reigning in the world due to the conflict in Ukraine and the sanctions imposed on Russia.

The main goal of the new capital construction project is the redistribution of wealth that is concentrated on the island of Java, which, although it occupies only six percent of the total territory of Indonesia, carries 57 percent of its total population (which amounts to 275 million people), and participates in its gross national product with as much as 59 percent. Java is, in fact, the island with the largest number of inhabitants in the world.

About 11 million people live in Jakarta, which is located on its northwestern edge (near neighboring Sumatra). That huge city is infamous for its traffic jams and air pollution, as well as numerous floods that destroy the insufficiently organized sewage system and periodically cause crisis epidemiological situations. In addition, it is located on loose soil and sinks five to ten centimeters per year. That’s why another goal of building a new capital is to ease the pressure on Jakarta’s infrastructure.

Of course, the idea is that by building Nusantara, which should be an urban entity filled with greenery, well blended with the jungle, through large infrastructure investments, an important development stimulus to the economy, especially the construction sector, and through cooperation with foreign companies to contribute to the introduction of new ecological, information and other technologies needed for the functioning of a smart, green city of the future.

The start of the works, however, comes at an unfavorable moment for the economy of the whole world, so there are already hints that the government’s attempt to shift construction costs mostly to the private sector, i.e. foreign investors from countries such as the UAE, China, the Republic of Korea and Japan, will not go smoothly. . For example, the largest Japanese company in the field of telecommunications and cybernetics, “Softbank”, which registers annual profits of several tens of billions of dollars each, abandoned its investment in the construction of Nusantara.

Not only the profitability of the project is being questioned, but also its entire meaning, because Nusantara should become the political center of the country, since it would contain the parliament and ministries, but not the industrial and commercial heart of the country – functions that Jakarta would continue to have. . This absence of economic activity could seriously hinder the settlement and further natural expansion of the new capital.

Investors’ doubts are further fueled by the failure of previous plans to relocate the government from Jakarta, i.e., the concern that after the expiration of the second (and according to the constitution, the last) mandate of current President Widodo in 2024, construction could stop.

Nevertheless, President Widodo and other Indonesian proponents of the idea of ​​the planned construction of a new political (that is, administrative) capital of the country can refer to numerous well-known precedents from the past, such as Ottawa, Canberra, and even Washington, which, despite initial skepticism, grew to successful metropolises, but also to examples of artificially developed urban units from the recent past, such as Brasilia or Putrajaya in Malaysia, which, although they have not achieved the atmosphere and life of cities that have grown naturally, represent architecturally and economically impressive projects that testify to the financial and the technological strength of the countries that raised them. Also, Egypt is currently building a new capital city in the desert, which should house as many as six and a half million inhabitants, in order to facilitate the functioning of overpopulated Cairo.

It is curious that the name of the new Indonesian capital (“archipelago”), which should be completed by 2045, exactly one century after the declaration of independence of the country that was a Dutch colony, was chosen by President Joko Widodo himself, in accordance with the name of the project of the plan that won the tender and in the belief that it well expresses the character of Indonesia, which stretches over 17 and a half thousand islands.