Jokic will win greater than convincingly 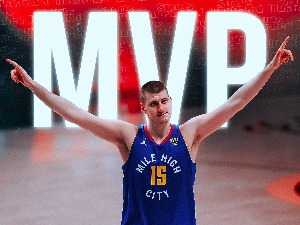 As many as 91 out of 101 participants gave Nikola first place, eight ranked him second and only one ranked third among the best players of the season.

HOLDING A SWORD IN HIS RIGHT HAND, HIS HEART IS FLEXIBLE TOWARDS…

THIS IS THE EPILOGUE OF THE STORY THAT SERBIA WAS BURNING ABOUT!…

That gave a total of 971 points, which is far more than the second-placed Joel Embida from Philadelphia (586) and the third-placed Steph Curry from the Golden State (453).

Jokic thus became the first player in the history of the Nuggets to receive this prestigious award, the first man from Serbia to succeed, the first player to be drafted in the second round and reach the title of the most useful and lowest placed pick (41) in history. was named MVP.

What can I say but: Bravo, master!

The Latin star publicly expresses his love for Luana

HOLDING A SWORD IN HIS RIGHT HAND, HIS HEART IS FLEXIBLE TOWARDS KOSOVO AND METOHIJA!…

THIS IS THE EPILOGUE OF THE STORY THAT SERBIA WAS BURNING ABOUT! Siniša needed to…

SIGNED CONTRACT WORTH 87 MILLION EUROS! Reconstruction and modernization of the…