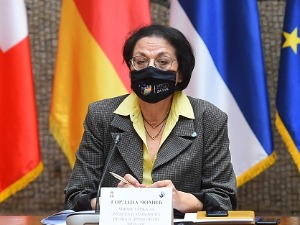 Gordana Comic noted that both laws have gone through a “thorny path” and that there is great resistance to social change.

As she stated, the topic of politics is to change social relations, and that change is harder than changing space.

“This is an illustration of the way in which both laws had a hard time passing through institutions, through criticism of public opinion, through resistance, through prejudice, through behavior based on prejudice, that all this does not exist and that there is no discrimination in Serbia and that women very great, “said Comic.

Chomic said “that life cannot be denied”, no matter how long the fight to explain the obvious lasted, and that is that discrimination exists, that the culture of human rights in Serbia should be built with dedication every day and that women are unequal in many positions.

“Conquering freedom is difficult because resistance is organized”

Gordana Čomić concluded that there is resistance to social changes, to changes in behavior, resistance to building a culture of human rights.

“That is why winning freedom is difficult, since the resistance is organized,” said Comic.

She pointed out that the Law on Prohibition of Discrimination introduces several new institutes, stating that it is a matter of segregation.

Comic also said that the Law on Gender Equality makes provisions for building a system that will guarantee and ensure equal, equal, equal access for both women and men to everything that is social resources, from the budget, through participation in decision-making, political parties, public sector.

What Cindy is warning after leaving “Match”

Lajçaku meets Kurti in Brussels, discuss the continuation of the dialogue – Latest News