Mbape and the “saints” conquered the snow-covered Munich 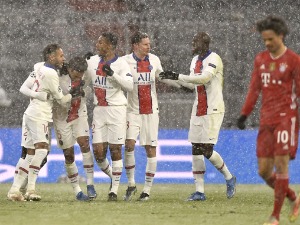 Last year’s finalists of the Champions League met, this time, in the quarterfinals and immediately prepared a spectacle.

Bayern, without Robert Lewandowski and with a whirlwind, welcomed PSG in Munich, and Hansi Glick had headaches from the third minute.

After a good attack by Bayern, the lightning response of the “saints” followed – Di Maria for Neymar, the Brazilian lost to Mbape at the ideal moment, and he shot strongly.

Neuer was on the ball, but he could not stop it, so PSG took the lead in the third minute.

The fight flared up, football was open and attractive on both sides, and the guests reached a new goal in the 28th minute.

Bayern’s defense started to come out after the break, Marquinhos slipped away and accepted the long ball sent by Neymar, and then calmly placed the ball in the net.

Bayern managed to wake up, although for a moment it seemed that they were in a very difficult situation.

Chupo Moting was forgotten in the penalty area, Pavar centered excellently, and the former PSG player reduced and brought hope to the home team.

After the break, Bayern went on the attack with all their might. He hit from all sides, but Kaylor Navas defended everything that could be defended.

The Costa Rican could not do anything in the 60th minute, when Thomas Miller experiencedly ran away from the PSG defenders, avoided the offside trap, and then brought the equalizer with his head.

Bayern was completely in the match, moreover, even stronger attacks were expected, but PSG managed to cut them, with a new goal by Killian Mbape.

Played in the 68th minute, Mbape hit the post with a precise and strong shot, elusive for Neuer.

Bayern attacked until the end of the match, but they did not manage to save the defeat, so they will have to look for a way to the semifinals of the Champions League away.

In today’s second match, Chelsea defeated Porto away with 2: 0.

Her makeup artist Sellma congratulates Vjosa with the best words