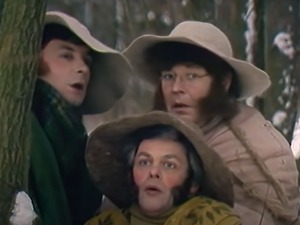 The television movie The Guardians, based on The Fellowship of the Ring – the first part of Tolkien’s trilogy, is the only adaptation of The Lord of the Rings made in the Soviet Union.

Aired 10 years before the release of the first part of Peter Jackson’s mega-popular trilogy, the low-budget film really looks like it’s from another era. The costumes are very simple, the special effects are “special”, and the film is more reminiscent of a theatrical performance.

The main musical theme was composed by Andrej Romanov from the rock band “Aquarium”. The adaptation was broadcast only once on television before it disappeared in the archives of Leningrad Television.

Very few people knew that it even existed until 5TV, the successor to Leningrad Television, suddenly posted the realization on YouTube last week, and in just a few days, 400,000 people watched it.

“Fans have been searching for this in the archives for decades without success,” says the Russian magazine World of Fantasy. One man commented on social media: “Whoever found this should erect a monument.”

Adaptations and translations of Tolkien’s work in the USSR are almost non-existent. Some claim that the work is censored because it speaks of a union of different races fighting against a totalitarian eastern power.

Some, however, state that the reasons are of a linguistic nature and that the work of the British writer, due to its rich language, was difficult to translate into Russian, and that the translation remained consistent with the original.

President Osmani is inaugurated tomorrow, but without ceremony – this is her agenda for this day – Latest News