“Mitrogol” equaled Stjepan Bobek – one other to immortality 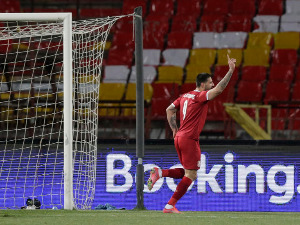 On the debut of the new coach Dragan Stojković Piksi, Serbia did not shine, it even lost, but it made a turnaround in the second half.

It was directed by the reserve player Mitrović, with two goals, the first of which is perhaps the most beautiful in his career so far.

Six minutes after entering the game, he brought a turnaround with a masterful lob from 25 meters, and then Tadić’s third assist was later put into the net with his head.

“Mitrogol” is now at level 38 and is tied on the first position of the eternal list of scorers with Stjepan Bobek.

The Fulham striker will have the opportunity to become the absolute record holder in three days, when Portugal is visiting Belgrade.

Is Mevlani the male model that girls pull hair?