Navalny again in courtroom, this time for defamation 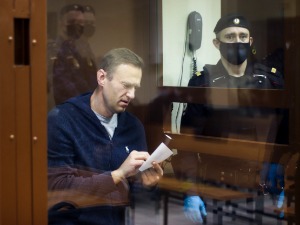 Last week, Alexei Navalny was sentenced to three years in prison for violating a suspended sentence, and he called such an explanation a fabrication, Reuters reported.

In the accusation of defamation, Navalny is accused of belittling a World War II veteran who appeared in a promotional video in which he supports constitutional changes, which would allow Russian President Vladimir Putin to run for president twice more.

Navalny called the people from the promotional video traitors and corrupt lackeys, and accused the authorities of using fabrications to further denigrate him.

The law is in force and if found guilty of defamation charges, Navalny could face up to two years in prison, but his lawyer said he could not apply it to his client because when he said so, the law had not yet been adopted.

It is not yet known whether the judges in this case agree with the lawyer’s assessment.

Due to Navalny’s arrest, demonstrations were organized throughout Russia, and his allies are planning a new type of protest by lighting lamps from mobile phones and candles every 15 minutes in their backyards and windows, terraces across the country.

Earlier in the day, Russian Foreign Minister Sergei Lavrov said that Russia was ready to tighten relations with the European Union if the European bloc imposed economic sanctions on that country.