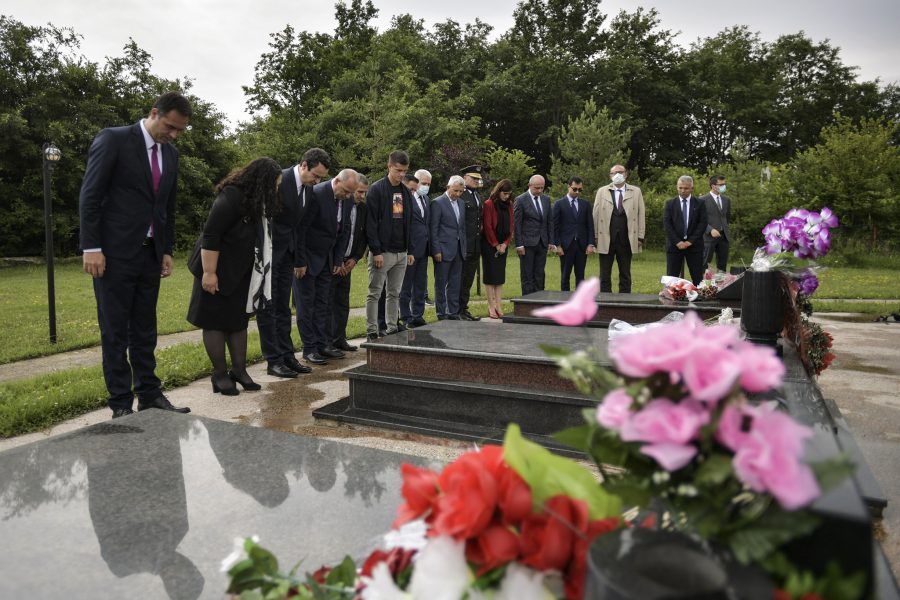 22 years ago in the village of Poklek in Drenas, the Serbian army killed, massacred and burned 53 Albanian civilians of the Muqolli, Elshani, Caraku and Hoxha families, among whom there were children, the youngest being Liria for six months. Today, 22 years later, in the yard of the house where the whole event took place, a ceremony was held to mark the Day of Peace, or the day of the liberation of Kosovo.

In addition to representatives of Kosovo institutions, family members were also present, ambassadors accredited to Kosovo, the head of the EU Office in Kosovo, and many other international officials.

In her speech, the President of Kosovo, Vjosa Osmani, said that the reason why the ceremony was moved to this village of Drenas is to show how expensive the price was for the freedom of Kosovo.

The first of the state said that they moved the manifestation exactly in this place to prove that the voice of the victims of the massacre of Poklek, Chikatovo, all of Drenica, but also of the whole Republic of Kosovo, then the voice of 1 thousand 639 missing is still echoed in the ears as a call not to stop the efforts to bring justice and to unravel the fate of the missing.

“22 years ago, when the Secretary General of NATO visited Kosovo, he left us a statement which reflects so much even now after more than 2 decades. On the plaque you will see here in Poklek you will see his quote. I quote ‘Anyone who may doubt the fairness of NATO intervention should come to Poklek’. That is why we are back here today, where the NATO Secretary General himself has always advised us, and above all, where our human conscience calls us every day. And we come back not because some of us here have doubts about the justice of NATO intervention which stopped the Serbian genocide but to reiterate this message today and every time and to understand how expensive the price of the lira was for the people of Kosovo . Because to tell the truth is not only a political and institutional obligation but most of all it is our moral obligation to all victims of the war in Kosovo[…]”Today, Kosovo is dressed in the guise of pride for the strong alliance we have with NATO and the countries that came to our side”, said Osmani.

Osmani said that exactly today they commemorate the sacrifice of every soldier of the Kosovo Liberation Army, where he said that KLA soldiers from the ground and NATO from the sky made possible the freedom of Kosovo.

“The freedom of small peoples is really born of great suffering. This is evidenced by the symbolism of the girl who was killed and burned in this house, which ironically bore the name Liri. Freedom was only 6 months. Too young to smell the sadness of the day and the endless nation. Today we are back here to remember her name, the name she gave to each of us. Freedom had its name, but it could not enjoy freedom .. today it rests in the same grave with over 50 other victims because they were burned so many, so many times that they could not even identify. More than 50 people in the same grave have become the strongest evidence of the Serbian state’s intention to exterminate and commit genocide. But the Milosevic regime could not achieve this because the insistence of the people of Kosovo on freedom led by the KLA war as well as our strong alliance with NATO and the democratic world ensured our freedom so that we all together let us come and bow before the human sacrifice of the victims of Poklek, the victims throughout Kosovo. “The sacrifice of every soldier of the KLA, the KLA from NATO soil from the sky, which made our freedom possible,” she said.

The Prime Minister of Kosovo, Albin Kurti, said that June 12 marks the end of the genocide in Kosovo, while he said that peace in Kosovo came with the entry of NATO troops and the departure of the Serbian occupiers on June 12, 1999.

Kurti said that Kosovo is a partner with the most powerful democratic countries in the world, and this partnership especially with NATO where they aim to integrate, Kurti said that it gives you security for peace even today as it gave you on June 12, 1999.

“We could mark this day in every city or village of Kosovo because the whole body of Kosovo is full of signs of wounds, who need justice as the only medicine to heal. But, we gathered here in Poklek because this place is a monument and evidence of the Serbian genocide against the Albanians in Kosovo. In the Poklek massacre, 53 innocent citizens were killed by the Serbian police, while 3 others are still missing. 25 of the killed were under the age of 18, ie minors, and of these 18 persons were children under 12 years old, among them 5 infants from 6 months to 2 years. The Albanian civilians of the Muqolli, Elshani, Caraku and Hoxha families were leaving their homes, but the Serbian police ordered them to return there, shooting them with hand grenades in the rooms where they were staying, and then with automatic weapons, and in the end he even burned their bodies. “This was Milosevic’s Serbia,” he said.

He said that they gathered today in Poklek to denounce once again that exactly the myth of Kosovo as the cradle of Serbia, was the one who strangled and burned, which again threatens to kill and burn Albanian babies.

“Serbia today is still ruled by people who were ministers and senior officials at the time when these massacres were ordered and carried out by the Serbian police and army. Of course, today they can no longer come to invade and kill us civilians and children, but not only do they not deny their dreams, they continue to proclaim them publicly with the myth of Kosovo as the cradle of Serbia, but also with the investments of persistent and unbridled for modern armaments, buying weapons from Russia, Belarus, China and other countries. What is Serbia arming itself for, this country that has not yet acknowledged and apologized for the mass crimes it committed 22 years ago. We must sue Serbia for genocide, the killing of civilians, minors, babies, pregnant women, the elderly, rape used as a weapon of war. “All these have been documented and are being documented and we will never stop seeking justice,” he said.

The Speaker of the Assembly of Kosovo, Glauk Konjufca, said that June 12, 1999 is the fulfillment of a very long process, is the crowning of all long-standing sacrifices for the liberation of all efforts for freedom and sublimation of shed blood and the legacy of implemented of martyrs.

On this day, Konjufca said that the glorious and just war of the KLA took place together with the help of the US, allies and NATO and gave the seal of a secure future to Kosovo.

“In Serbia, there is no remorse for all this and there has never been, on the contrary, Milosevic’s political legacy has been installed in institutions in power. Institutions and representatives of the regime in Serbia feel great grief when war criminals like Karadzic and Mladic are convicted. Therefore we must stay more united than ever. The danger and intimidation from Serbia has not passed yet, the threat is more present today than ever before since June 12, 1999, because as long as Serbia still has plans to return to Kosovo, it does not hide them at all. we must be ready to defend our homeland at all costs. As long as Serbia has us in its constitution and Kosovo is included in the Constitution of Serbia and as long as it considers us its land, nothing is over with Serbia. Therefore, we must celebrate June 12 with pride, but also with vigilance “, he said.

Teuta Elshani spoke on behalf of the family, who said that they continue to seek justice for their loved ones.

“Innocent lives were plundered that day in this country and in the most horrible way that humanity can imagine. Even 6-month-old babies were not forgiven, nor was their baby writer. We have lived with pain for 22 years, but the time has come for this pain to turn into strength to work together to discover the perpetrators of this massacre and all the massacres in Kosovo. We owe it to the fallen to raise their voices and seek justice before the democratic world. As Kosovo we are at a key moment and we have the right people to work in this direction together with our Euro-Atlantic partners. The time has come for justice to finally do the right thing, condemn the Serb genocide committed in Kosovo and uncover the fate of the missing, so that our country can heal from the wounds of war as the only solution to move forward in “Our path to European integration,” she said.

All participants in this Liberation Day event also visited the house where 53 Albanian civilians were burned and listened closely to the stories of family members and survivors.