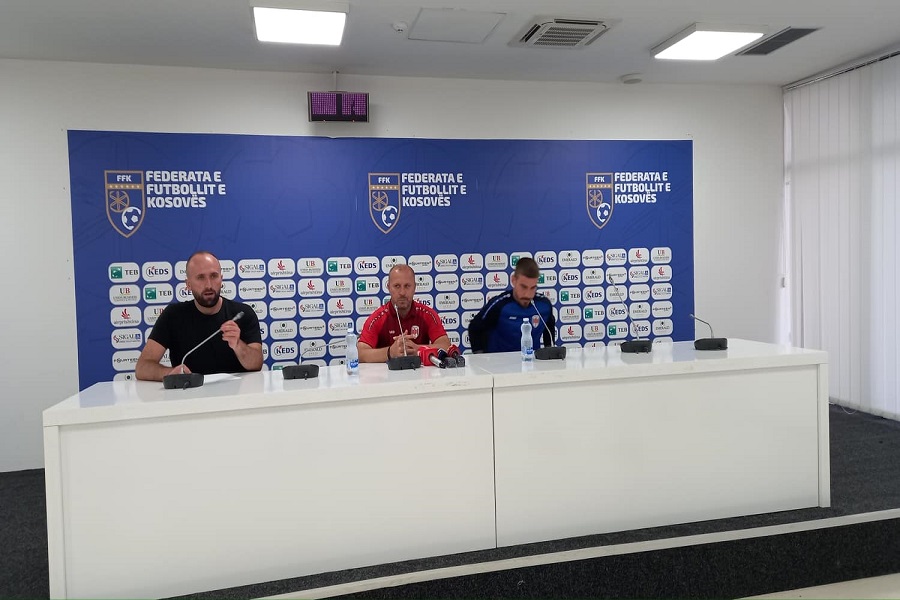 Prishtina coach Zekirja Ramadani has expressed his conviction that this team is ready to give the maximum in the next two matches against the team from Wales Connahs and to continue further in the Conference League.

Ramadani together with the player Gledi Mici appeared in a press conference before tomorrow’s match against Connahs within the Conference League and expressed their readiness to give the maximum to them to continue further in this race.

“Tomorrow we have a new competition, both we and the opposing team are beginners because this is the first time this new competition. I think that these matches have done me good to increase the experience within the group for these competitions and in front of us we have an opponent completely different from what we had in the first round of the Champions League. An opponent who defends very well, who does not attack, they also lack the necessary experience, but we have to enter with the utmost seriousness to win this match and to do the job a little calmer before the return match “, said Ramadani .

The white and blue coach added that the team is very motivated for this match and that their goal is to pass to the third round of this competition.

“The motive anyway is because now I think we are equal with the opponent, we are not at a disadvantage as if we were facing Ferencvaros which was the absolute favorite and our main objective is to pass this round, not to play but also to pass . ”, Stressed Ramadani.

Asked if he would consider it a failure if Prishtina does not go further, Ramadan and that this could not be called a failure but in any case he would take responsibility for an eventual failure.

Ramadani: I take responsibility in case of failure

Video: 06:36… I know it would have been a failure if we were eliminated by the champion of San Marino or Andorra. I said I do not want to consider myself the favorite or our favorite team, but we are equal to slightly higher quality. “Football has experienced a much bigger failure than this, maybe it would be bad to be eliminated but we would not have considered failure and the responsibility for failure I have taken,” said Ramadani.

Ramadani also spoke about the return of Plisa to the stands that tomorrow will be present in 30 percent of the capacity of the stadium “Fadil Vokrri”.

“I think that as the Plisas, who are among the most organized groups of Albanian fans, have proved for many years. I think that tomorrow we will have their support to the maximum and this would be a force pushed for us by them but not only Plisat, I believe it is other football fans will come and support us and will they support us. ”

While Gledi Mici, player of Prishtina, expressed his conviction that they are better than tomorrow’s opponent and that they will give their best in both matches to move on.

“As the coach said, we are prepared for this match to get the maximum. It is normal that when he plays in these competitions it is not always easy as they are also champions of their country but anyway my personal opinion is that we are more advantageous than them as we are better but we still have to show it on the field in both matches which is 180 minutes, tomorrow’s match alone is not enough. I hope tomorrow we make the job as easy as possible for ourselves and have it more comfortable when we go to their house and Mici.

The match between Prishtina and Connahs takes place tomorrow starting at 18:00 at the “Fadil Vokrri” stadium in Prishtina.