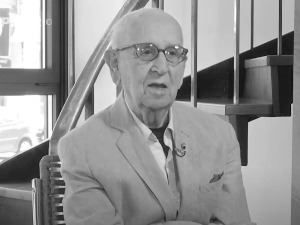 He was born on St. George’s Day, May 6, 1924. Before the outbreak of World War II, he was a member of SKOJ, and immediately after the outbreak of the uprising, he joined the partisans. He was captured and sent to the Institute for Forced Education of Youth in Smederevsky Palanka.

After the war, he started working as a journalist in Politika in 1946. He soon became the editor of Film News, and later directed documentaries.

He shot more than 80 feature-length and short films, for which he was awarded from Venice to Rio de Janeiro.

His tetralogy Girl, Dream, Morning, Noon with the addition of cyclists and cross country is a unique unit in the history of our film and was created in the period from 1965 to 1970.

Recognizable for his anarchic, fragmentary dramaturgy and a kind of film lyricism, Puriša Đorđević is also remembered for the fact that Mija Aleksić, Neda Arnerić, Drago Čuma, Ljubica Ković, Pepi Laković, Jelena Žigon, Radmila Guteša made their debut as film actors in his works…

The theme of his films are love and war, more precisely – war love through the lens of poetry and fatalistic morality and the courage to speak about the untouchable revolution through irony and cynicism in a different way than was allowed.

He is the recipient of numerous awards:

– Sertenjski order of the second degree for special merits in the field of film art, on the occasion of – the Statehood Day of the Republic of Serbia (2016),

– Film script festival in Vrnjačka Banja (1997) for the film Tango is a sad thought that dances,

He also published a dozen books, three plays and countless stories published in newspapers and magazines. He was also a very prolific screenwriter.

He married Milena Dravić in 1960, with whom he later divorced. He has a daughter Lidia from his second marriage.