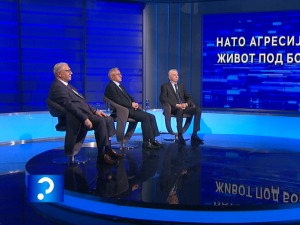 Nikola Sainovic, former Deputy Prime Minister of the Government of the FRY, pointed out in the show Questionnaire that the then leadership was aware that the bombing was possible, because there was a threat.

He assessed that they considered the threat of bombing as a life threat, but also a life curse, and that, as he stated, “we still stand as a state and as a people”.

“You have to defend the state, the people and your historical heritage. The size of that defense determines your determination to defend, not the size of the force. It is often said that you went to war. No, the one who bombed went to war, we went to defense, “Sainovic said.

Asked whether NATO aggression could have been avoided, Sainovic said that what was then the red line they set in all contacts and negotiations, that the sovereignty of the state is untouchable, and the autonomy of Kosovo and Metohija is immeasurable.

“That is the key line, the line of defense. I do not see that we could say to a group of countries, and that is NATO, sovereignty over our country, we accept armed groups that carry weapons and can deprive of liberty whenever they want,” Sainovic emphasized.

He confirmed that the then President of Serbia, Milan Milutinović, offered for Yugoslavia to join NATO so that Kosovo and Metohija would remain part of the country, but that Christopher Hill said that this was not a topic and that he would not discuss it.

A total of 1,065 members of the Army and MUP were killed

Retired Colonel General of the Yugoslav Army Vladimir Lazarevic reminded that 1998 was not a year of peace for the Pristina Corps either.

“We fought heavy anti-terrorist battles on the state border and with tens of thousands of terrorists in Kosovo and Metohija. Across the state border, units of the Pristina Corps prevented the incursion of an entire division, over 9,000 terrorists and foreign mercenaries, seized 150 tons of weapons.”

Lazarevic stated that the Serbian Army had 555 victims in 1999, that 45 members were killed in Kosovo in 1998, and 11 in the Ground Zone after the war. A total of 1,065 members of the Army and MUP were killed, Lazarevic said.

The most difficult moment for Lazarević was to leave Kosovo and Metohija with his army, with which they defended their lives.

Sirens sounded 296 times in the 78 days of bombing

Avram Israel, the former head of the Center for Information and Alarm, said that the alarm system was sounded 296 times during the 78 days of bombing, of which 148 times was the air danger in Belgrade.

He assessed that the change of the then government and the holding of democratic elections could have been a sign of good will in order to slow down and postpone the aggression against Serbia.

He cited the tragedy in RTS as the most difficult moments during the aggression, when 16 workers were killed in the bombing because, as he pointed out, the management did not protect them.

He reminded of the bombing of Batajnica every night and the murder of the girl Milica Rakić, the bombing of the “First Spark in Barič”, as especially difficult events during the bombing.

He also pointed out that at that time there was a fight for the truth, and that he was the first victim of the truth during the bombing, and that an order came to, as he said, take cover.

How did Blerona Zeqiri lose weight for a month?