RTS :: New army base in Kosovo 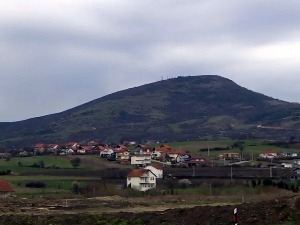 The height of Crnuša can be reached from two directions. It can be from the south from Vushtrri or from the north from the foot of the Stari trg mine. Both approaches pass through a territory inhabited exclusively by Albanians.

The base will cover almost 200 hectares. Currently, Vis Crnuša is used for mobile telephony repeaters and radio and TV signals.

The owner of the space is the municipality of southern Mitrovica. Its leadership ceded the land to security forces that are in the process of transforming into the army.

“That base is practically like a checkpoint waiting for game. It is a base from which they can act with artillery weapons so that they do not move anywhere. It is enough from there that all villages and the northern part are bombed and Serbs see great danger in building that base. “, emphasizes Ilija Elezović from the northern part of Kosovska Mitrovica.

South Mitrovica is ruled by Albanians and northern by Serbs. From the heights of Crnus, both parts of the city could be seen as in the palm of your hand.

In the southern part of Mitrovica, Serbs in the north do not have the feeling. They suggest that the future base be named after Isa Boljetinac, the leader of the guerrilla resistance of Albanians towards Turks, Serbs and Montenegrins.

They say that with the new base, Mitrovica will be a stable city, and “every inch of the country will be protected.”

“They will have training grounds, they will have observation stations and they will be able to carry out a kind of flash cross from that area, ie rapid penetration and deployment in the north of Kosovo all the way to the administrative line with central Serbia, provided that KFOR does not stop such actions “, notes Milovan Drecun, President of the Committee for Kosovo and Metohija of the Serbian Parliament.

The agreement between Belgrade and NATO is that members of the security forces cannot go to the north of Kosovo without the approval of KFOR.

KFOR says that NATO is still reviewing its level of commitment to the Kosovo security forces and that they continue to see them as an organization for responding to natural disasters.

Since December 2017, when the Kosovo Assembly approved the ten-year transformation of the security forces into the army, that organization has been building infrastructure for several thousand soldiers.

Members of the security forces have recently been preparing for the first international mission, and they will also participate in the NATO operation “Defender of Europe”, which covers the entire region except central Serbia.

Zemaj: We is not going to enable totalitarianism to encroach on our freedom-loving individuals