Serbia will donate 50,000 doses of Sputnik V to Iran 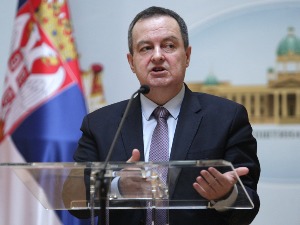 Dacic said that Serbia and Iran are traditionally friendly countries, and that dates back to the time of the former Yugoslavia.

“We have always had mutual understanding for all problems, double standards that the international community has. Here I was the envoy of the President of the Republic, at the inauguration of the new President Raisi, with whom I spoke and conveyed the greetings of President Aleksandar Vucic,” Dacic told reporters.

The president of the assembly states that Serbia will donate 50,000 doses of vaccines to Iran.

“I conveyed the decision of the Government of Serbia to donate 50,000 doses of Sputnik V to the people of Iran. We know that it is a small amount for such a large country, but it is a gesture of friendship,” said Dacic.

He pointed out that he had talked with Iranian diplomats about mutual visits at the highest level.

“I had a good conversation with the Speaker of the Iranian Parliament. We have good relations, those relations are especially expressed in mutual support. Iran has not recognized Kosovo, Iran supports Serbia in international organizations. On the other hand, Serbia takes into account Iran’s interests and foreign policy. in a way that does not depend on the dictates that come from certain parts of the world, but we are guided by national and state interests, “Dacic emphasized.

He said that there is a mutual desire for economic cooperation between the two countries to develop more and more.

“Our wish is for our economic cooperation to develop more and more, to start exporting our meat. So, in addition to agriculture, we want to cooperate in the fields of industry, tourism, pharmaceuticals, IT technology and so on. The inauguration was a very important event. “I have had the opportunity to see representatives of some other countries, such as Russia and India, and I have also met with representatives from Asia, Africa and Latin America,” Dacic concluded.