Serbian volleyball gamers is not going to defend gold on the European Championship, Italy goes to the finals 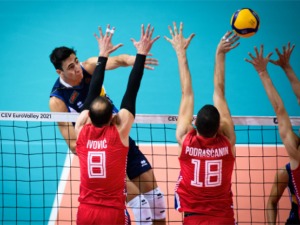 Serbia and Italy played an excellent match in the semifinals of the European Championship, in the end the “Azures” were better and will deservedly fight for the title of European champion.

The team of coach Slobodan Kovac did not manage to repeat the placement from two years ago, when they defeated Slovenia in the final in Paris, but they will have the opportunity to fight for the bronze medal, against the host Poland on Sunday (17.30, RTS).

Italy was a better rival in the semifinal match in Katowice, but the impression is that the “eagles” did not miss much to defeat the great rival.

However, the Italians were safer, more energetic and made fewer mistakes in crucial moments, and they deservedly found their place in the final.

In the first set, a great fight was seen, Serbia missed the set-ball, and the Italians used their heel and came to the advantage – 29:27

Coach Kovac tried to restore strength to his team with changes – Atanasijevic came in instead of Luburic, captain Petric instead of Ivovic – but the Italians decided the second set in their favor with a safe game – 25:22

In the third set, Serbia provided the game that is expected from the European champion, and even the extremely cheerful Italians, led by Gianelli and Michelot, did not have a solution for the Serbian attack – 25:23.

When it was expected that Serbia would stumble even harder, the opposite happened – the Italians won the first five points in the fourth set and indicated that there would be no more real fights.

Serbian volleyball players tried to reach a high advantage of the opponents, but they were not served, while the Italians “flew” on the field and showed why they lost only two sets in this tournament until this game – 25:18.

On Sunday, Serbia will have the opportunity to win its ninth bronze at the continental championships against the host Poland, while the Italians will fight Slovenia for the seventh gold in history.