Serbs are on their very own 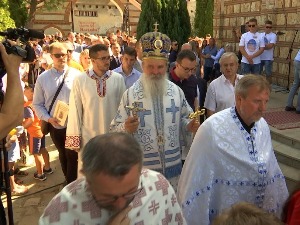 Petar Prković attended the holy liturgy in Prilužje in the church dedicated to the Feast of the Transfiguration of the Lord and announced that the Government of Serbia and its President Aleksandar Vučić will fight even more and even harder for Vushtrri and all Serbian communities in Kosovo and Metohija in the coming period.

“Today, we are witnessing that unity here, in front of this temple, because the state of Serbia and the Serbian List and our church are present here. Only united and united can we survive and stay here in Kosovo and Metohija,” Petkovic said after the liturgy.

Petković also conveyed the greetings of President Vučić, when he stated that he was doing everything to defend Serbian national interests in Kosovo and Metohija.

“We are here to help and fight even more for the municipality of Vushtrri, for our institutions, for new jobs and for many other investments and projects that the Office for Kosovo and Metohija through the Government of Serbia really not only initiates, but also finances, but also ends “, stated Petković.

He said that only together, the church and the state of Serbia and the Serbian List are the guarantor of the survival and stay of Serbs in Kosovo and Metohija.

“We are here on our own, we want peace here, we want new jobs and we will do that as the Government of Serbia and President Vučić. The other day, President Vučić made it clear that neither the pogrom nor the ‘Storm’ will ever happen again. “That is why you can be sure, because your state of Serbia is with you, and we will do everything we can to help you have a life worthy of a man in the 21st century here,” Petkovic said.

Previously, the Bishop of Raska and Prizren, Teodosije, with the clergy in Prilužje, served the liturgy in front of several hundred believers, cut the feast cake and consecrated and distributed the Transfiguration grapes.

In his sermon, Bishop Teodosije said that if we want to be transformed in this life, we must climb Mount Tabor and rise above transient and temporary values, and we can only climb through virtue, through fasting, prayer, all the good deeds we need to do. .

Priluzje is the largest Serbian village between Kosovska Mitrovica and Pristina, with several hundred households and several thousand inhabitants.