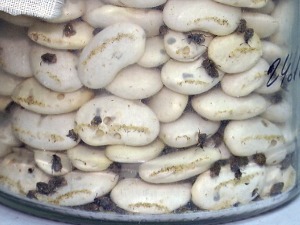 Little bug, big problems. For more than a hundred years, the bean weevil has been taking away a good part of the farmers’ earnings.

“Pierce the grain, leave the larva inside, eat the key part, destroy what germinates, so that the grain is unusable. Neither for food, because who will eat the bug, nor for sowing, because there is nothing to germinate,” explains Maja Babić from Grocke.

Mild winters are especially good for him, so it is recommended that the beans dry well and freeze for a few days, which will destroy the larvae in the infected grains.

The next concern is the warehouse. “Old beans must be taken out, cleaned and disinsected,” says professor Dušanka Jerinić Prodanović from the Faculty of Agriculture.

Insecticides are currently the only safe weapon, but not the option chosen by producers of organic and biologically valuable food.

“In recent years, considering that plant protection products have been used a lot, primarily because they are effective and pest control is much easier, they have suppressed all other measures,” said Lidija Matijevic from the Plant Protection Administration.

A team of scientists from the Biological Institute in Belgrade has begun examining the genetic weaknesses of male females. The idea is to reduce the possibility of reproduction.

“The method itself is not GMO, because we use weevils from natural populations, insecticides are not used, and a new one is profitable,” says Mirko Djordjevic from the Institute for Biological Research “Sinisa Stankovic”.

Gird yourself – is the slogan of this project. Scientists urge producers not to look at beans, but to send them infected samples.

A 23-year-old man is killed in Mitrovica, 2 others are injured – Latest News

“We became moms to look like you”, this is Antonella’s close family