Sommer enchanted the objective, the referees prevented the defeat of Bayern on the opening of the brand new season 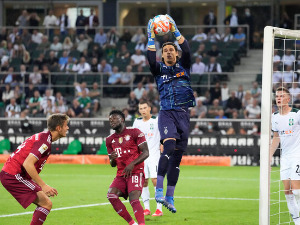 Nagelsman did not start his odyssey well in the Bavarian giant who showed a lot of problems on the first exam.

The match at “Borussia Park” started shockingly for the current champion of Germany, since the host started extremely aggressively and used a large number of mistakes by Bayern’s players.

Mensh threatened from the half-counterattack on several occasions, and in the 10th minute, a quick counterattack flashed after a mistake by Alfons Davis.

Lars Stindl escaped and exceptionally passed the ball to Alasan Plee in the fall, and he received and routinely hit the net guarded by Manuel Neuer.

The great celebration of the home fans began, and the Bavarians knew that they had to go much more offensive, and they did so. From attack to attack, they increased the pressure, they quickly started to create chances, but Jan Zomer was brutal among the stands.

The Borussia goalkeeper seemed to enchant his goal and with incredible interventions prevented Robert Lewandowski from opening his account on two occasions this season as well.

However, the Pole still found his way to the net in the finish of the first part of the game, when he managed well after a corner and equalized to 1: 1. Leva broke a new record as he became the first player in Bundesliga history to score for the seventh season in a row in the opening round of the competition.

Nagelsman’s boys continued to attack, the host waited for a mistake, and Sommer continued to defend as if in a trance. The most deserving is that the result was 1: 1 until the very end, because he prevented a goal in as many as six hundred percent chances.

The turn came to the excitement in front of Neuer’s goal – Stindl and reserve player Marcus Thiram missed incredible opportunities, who missed the ball in the top five on two occasions, and then referee Marko Fritz, with his assistants, prevented Borussia from winning.

In the space of a few minutes, he twice failed to award Dajo Upamekan’s penalty over Tiram. Both times, his decision was confirmed from the VAR room, but at least once he had to point to the white dot, especially with the second foul.

By the end of the game, Jozu Kimih had a great chance to win, he shot poorly and the derby at the start of the 59th season in the Bundesliga ended without a winner.

‘I Don’t Want to Risk My Life for a Paycheck’: Immunosuppressed People Grapple With Returning to Work