TERRORIST ATTACK IN VIENNA The variety of victims is rising, a number of arrests in the course of the night time, SOC temples TEMPORARILY CLOSED

TERRORIST ATTACK IN VIENNA The number of victims is growing, several arrests during the night, SOC temples TEMPORARILY CLOSED

At least five people were killed and more injured in last night’s attack in the center of Vienna, in which the police confirmed that it was a terrorist attack. One of the attackers was killed and one is still on the run.

What we know so far:

10:34 – The Minister confirmed: The terrorist is originally from Northern Macedonia

The Minister of Internal Affairs of Austria, Karl Nechamer, confirmed today that the attacker who carried out the terrorist attack in the center of Vienna last night originated from Northern Macedonia.

Nehamer said that the attacker, who was killed by the police, was 20 years old, that he was of Macedonian origin and that he was convicted of terrorist association. He told the APA agency that the terrorist had Austrian and northern Macedonian citizenship.

– He was equipped with a fake bomb belt, an automatic rifle, a pistol and a machete, a weapon with which he carried out a heinous attack on innocent citizens – Nehamer emphasized.

10:15 – The balance of casualties is growing 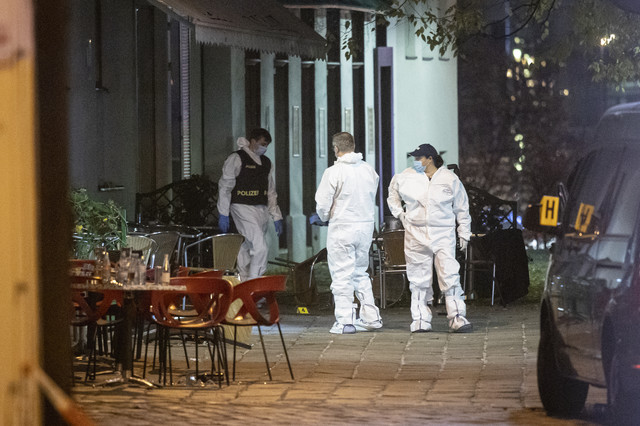 The Austrian government has confirmed media reports that five people have died, including the attacker who was killed by police. Interior Minister Karl Nehammer said that two men and two women were killed. A woman between the ages of 40 and 50 died at Otakring Hospital. ORF states that she is a waitress. Seventeen people were injured in the shooting.

The temples of the Serbian Orthodox Church (SOC) in Vienna were closed this morning due to a terrorist attack that took place in the center of the Austrian capital.

As soon as the situation is clarified and calmed down, the regular life of the church will be continued, the Church of the Resurrection of Christ announced. From the remaining two temples, it was confirmed to Tanjug that they were closed.

The Austrian government has decided on a three-day national mourning for the terrorist attack in Vienna.

The attacker Kurtin S. (20), who killed four people in the center of Vienna last night, was born and raised in the Austrian capital, said the editor of the Austrian weekly “Falter” Florian Klenk. According to him, Kurtin S. was previously known to the Austrian intelligence services because he was one of the 90 Islamists who wanted to go to Syria.

Klenk states that Kurtin S. has “Albanian roots”, but that his parents are from Northern Macedonia. He did not disclose the source of his information. 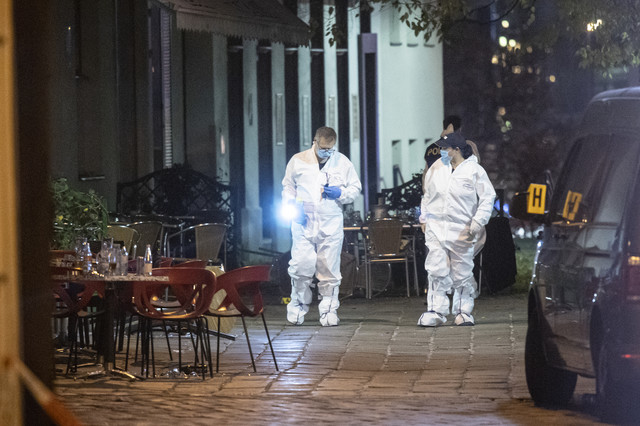 A total of seven people who were injured in last night’s terrorist attack in Vienna, in which four people and the attacker were killed, are in critical condition, life-threatening, the Association of Viennese Hospitals has confirmed.

17 people who were injured in the attack were brought to the Viennese hospitals, most of whom had bullet wounds, but some also had knife injuries, a spokeswoman for the Association told the APA. Ten people have moderate to minor injuries, and they have not yet been released from the hospital because they are also on the floor

At this morning’s press conference, the head of the Vienna police, Gerhard Purstl, stated that one of the attackers was “neutralized” at 20:09. 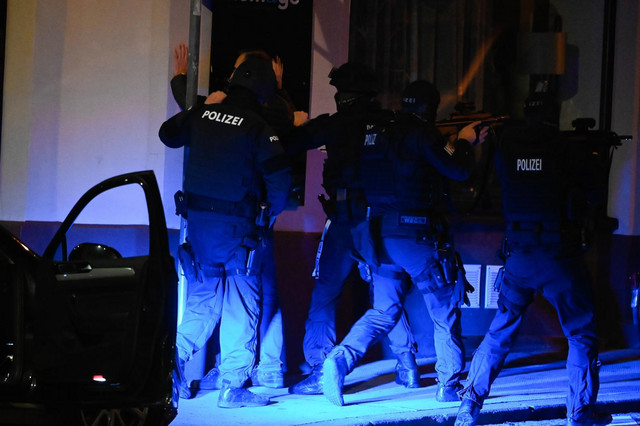 According to the words of the general director for public security, Franz Ruf, the apartment of the attacker was forcibly opened with explosives and a search was carried out. The Minister of the Interior did not answer the question whether the detonation that the witnesses noticed during the night in Simmering could have been the opening of the apartment. It is also not known what the police found in the apartment.

08:26 – Belgrade tonight in the colors of Austria

Belgrade will be in the colors of Austria tonight, as a sign of solidarity with that country after the terrorist attack in Vienna. Deputy Mayor Goran Vesić said that Belgrade, as a twinned city with Vienna, feels a special responsibility to show solidarity for the Austrian capital at this difficult time. That is why tonight the Bridge on Ada, Branko’s Bridge, the Palace of Albania, the fountain on Slavija and the House of the National Assembly will be in the colors of Austria.

08:13 – The attacker from Vienna was a sympathizer of the Islamic State

Before the terrorist attack in Vienna, in which three people were killed, a picture of a jihadist with a very similar weapon as the Viennese terrorist appeared on Instagram. Austrian police are still checking the identity of the killed terrorist, and the German Bild reports that investigators suspect that it is a person whose picture was posted on Instagram.

According to Bild, on Monday, he sent two friends footage of the attack on Charlie Hebdo from 2015, when 12 people were killed, and he posted several pictures on Instagram in which he swears allegiance to the leader of the terrorist militia of the so-called Islamic State. In some photos, he is posing with a rifle and a machete, and there is also a picture with a pile of ammunition, reports the Index portal.

Kurz scheduled a meeting at noon with Vice Chancellor Werner Kogler, Interior Minister Karl Nehammer, the Mayor of Vienna and the heads of parliamentary clubs. Also, it is planned that after that meeting, they will lay a wreath together at the crime scene.

US President Donald Trump spoke today on the occasion of the attack in Vienna, emphasizing that the attacks on innocent people must stop.

“We pray for the citizens of Vienna after another heinous act of terrorism in Europe. These attacks of evil against innocent people must stop. The United States, along with Austria, France and the whole of Europe, is fighting terrorists, including radical Islamic terrorists,” Trump wrote.

07:53 – Borelj: The attack in Vienna is a cowardly act of violence and hatred ??

EU Foreign Minister Josep Borelj says that he is shocked and affected by the news of the attack in Vienna, and told his citizens in Vienna that the EU stands by them.

– This is a cowardly act of violence and hatred – Borelj said last night on his Twitter account.

Osep Borelj expressed his condolences to the victims of the attack, their families and all the citizens of Vienna.

07:48 – President of Austria: We will defend democracy

Austria will know how to defend democracy and freedom, Austrian President Alexander van der Belen said last night, after the armed attack in the center of Vienna. Van der Belen stated on Twitter that he was deeply affected by this terrorist act, and that he sympathizes with the victims and the injured, as well as with their families.

“Together and decisively, we will defend our freedom and democracy by all means,” Van der Belen said.

07:43 – Three civilians and one attacker killed

The head of the Vienna police confirmed that three civilians, two men and one woman were killed in last night’s attacks. Some media wrote about seven victims last night, but that was not confirmed. One attacker has been eliminated, and the police cannot reveal his identity due to the investigation.

Nehamer says that the identity of the assassin is known to the police.

– Intensive police processing is already underway in his circle of family, acquaintances and contacts. This morning, the police used explosives to break into the apartment of the Islamist assassin – the Minister of Internal Affairs states.

07:21 – Police confirmed: It was a terrorist attack

Police Minister Karl Nehammer confirmed that it was a terrorist attack in the city center, near the synagogue. As he said, several attackers took part in the attack, who used long pipes. There are more wounded and dead, but he did not specify the exact number.

Interior Minister Karl Nehammer held a press conference where he said there were more dead and injured, and that at least one attacker was still on the run.

– This is one of the most terrible days that Austria has ever experienced. The children do not have to go to school tomorrow, that will be justified to them. If work opportunities allow, adults should also stay at home and work from there. The city center should still be avoided – said Nehamr.

– Our police will act decisively against the perpetrators of this heinous terrorist attack. I am happy that our police officers managed to eliminate one attacker. We will never allow terrorism to intimidate us and we will fight resolutely, by all means against such attacks – Kurz said.

After the meeting of the crisis headquarters, the mayor of Vienna, Michael Ludwig, reported that the assassins in the center of Vienna shot at people who were sitting in cafes.

– People were shot at in the bars, especially people who were sitting in the gardens – he said.

Ludwig said that he was appalled by the attack and that there was close cooperation between the police and the city authorities and city organizations with the goal of finding the attackers.

Terrible threats by an unidentified Islamist appeared on the official Twitter account of the Vienna police, which warned the citizens about the terrorist attack that took place last night in the Austrian capital.

“I swear by Allah, this is just the beginning,” wrote a certain Abdilmuntakim al Iraki.

07: 07 -Calculation for Austria’s participation in the American coalition?

After the terrorist attack in the center of Vienna, a post by a jihadist appeared on the American site specialized in monitoring Islamist sites “SITE”, claiming that the attacks were carried out due to Austria’s participation in the coalition led by the USA. In addition to that announcement, a picture from the center of Vienna was placed.

By the way, the United States has formed an international coalition against the Islamic State, and Austria is its member, which, however, does not provide a military contribution.

07:05 – The army takes over the protection of facilities in Vienna

Austrian Chancellor Sebastian Kurz announced last night that the army will take over the protection of facilities and locations in Vienna from the police.

– In order for the police to fully concentrate on the fight against terrorism, the government has decided that the army will take over the protection of facilities in Vienna from the police – stated Kurz.

Today, we will follow all the events related to last night’s series of attacks in the center of Vienna, in which at least three civilians and one of the attackers who shot in front of the synagogue were killed.

Kujtim F. (20) was killing folks within the middle of the Austrian capital