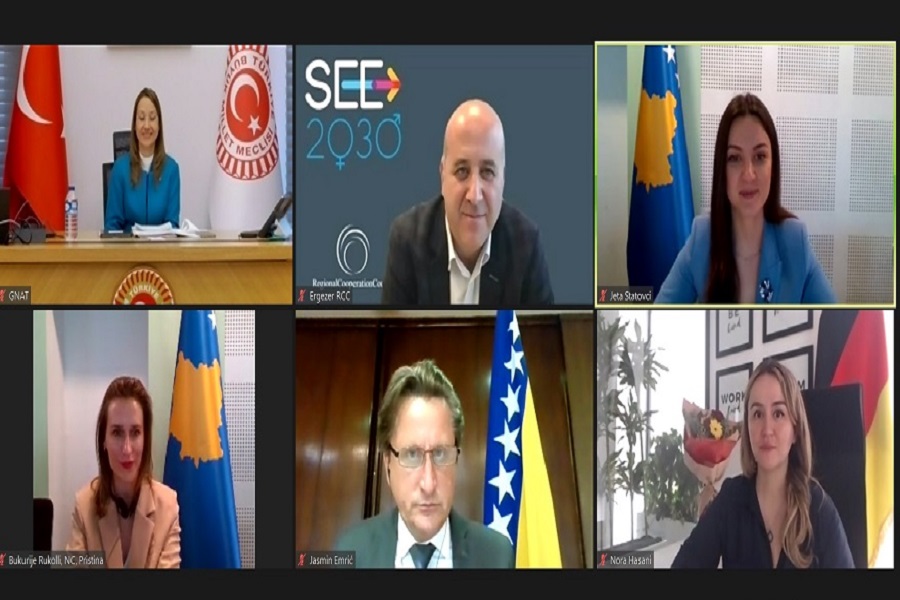 Today in Pristina was held the virtual meeting of the General Committee for Economy, Infrastructure and Energy of the Parliamentary Assembly of the South East European Cooperation Process (SEECP), on the topic “Economic challenges and opportunities in SEE countries after COVID-19” .

The meeting was chaired by the Member of the Assembly of Kosovo, Jeta Statovci, also a member and chair of the General Committee for Economy, Infrastructure and Energy of the SEECP.

The Minister of Economy, Artane Rizvanolli, has said that the pandemic COVID ‐ 19 has been defined as a global health crisis and the biggest challenge the world is facing since the Second World War.

“It not only endangers our health, but has hit the economies of every country hard, bringing with it the third and biggest economic and financial shock of the 21st century,” she said.

Rizvanolli said that the priority of the Government of Kosovo is the finalization of the National Energy Strategy and the National Plan for Energy and Climate, increasing economic development, cooperation with countries in the region, etc.

“I consider that regional cooperation will have a very important role towards the economic recovery of this transition both in our country and beyond,” she said.

The Managing Director of the German-Kosovo Chamber of Commerce, Nora Hasani, presented the results of the annual survey of the German Chambers of Commerce and Industry on “Challenges and economic opportunities in the countries of Southeast Europe (SEE) after Covid-19”, comparing the economies of 16 SEE participating States.

Also, Umut Ergezer, presented the strategy “Sustainable regional economic development and the role of parliaments”, in the context of the 2030 Strategy for Southeast Europe (SEE).

In this meeting, the member and chairwoman of the General Committee for Economy, Infrastructure and Energy of the SEECP, Jeta Statovci, presented the draft report on the topic of the meeting, which was then discussed by the representatives of the participating countries. .

The draft report and the draft resolution were welcomed by the participating delegations, but in the absence of a quorum, they could not be approved. The same will be processed in other meetings of the Assembly, in the framework of the Plenary Session, which will be held from 21-23 June in Antalya, Turkey.

In addition to Kosovo, the conference was attended by delegations from Albania, Turkey, Slovenia, Bosnia and Herzegovina, Northern Macedonia, Montenegro and Croatia.