The Bulls stumbled in Cologne, Bayern on two factors to a brand new title 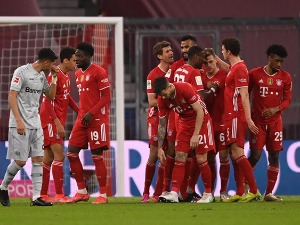 The Bayern team is sovereignly striving to defend the championship title in Germany, and the Leipzig players wholeheartedly help them in that, who continued to waste points in the 30th round of the Bundesliga.

The Bavarians defeated Leverkusen at home, with goals from Chupo-Moting and Kimiha, which brought them to 71 points in the competition.

Earlier, Leipzig was defeated in Cologne 2: 1, so the difference between the two first-placed teams is now ten points.

Eintracht continued with good games, and the 2-0 victory against Augsburg is extremely important in the fight for placement in the Champions League next season.

Goals for the team from Frankfurt were scored by Hintereger and Andre Silva, and the assistant for the second goal of the home team was Filip Kostić, who thus recorded the 13th successful pass of the season.

In Bielefeld, Arminia defeated the long-regretted Schalke with a minimal result.

After the separation from Ana, Arsimi publicly ‘pressed’ her with the competitor Përputha