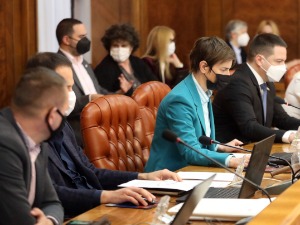 According to the statement, the law fulfills the obligations towards the international community, ie the UN Framework Convention on Climate Change and the Paris Agreement, and harmonizes domestic legislation with the acquis communautaire.

The Government notes that the proposed law reserves the right of Serbia to create a legislative framework and set development goals, taking into account all the specifics of the economic and energy sector and other national socio-economic parameters.

It is pointed out that the law sets the legal framework for further action with the aim of reducing greenhouse gas emissions and adapting to changed climatic conditions, which is one of the five strategic goals of the European Union and the basis of the green and circular economy.

The draft law, in the drafting of which all competent institutions participated, envisages the adoption of the Low Carbon Development Strategy of the Republic of Serbia with an Action Plan within two years, which will be valid for ten years from the entry into force of this law.

Members of the Government they also adopted the Employment Strategy in the Republic of Serbia for the period from 2021 to 2026, which defines reform steps aimed at establishing an efficient labor market in line with accelerated technological development.

The effects envisaged by the Strategy are the growth of quality employment through the cooperation of several sectors of education, economy, finance, social protection and local self-governments, and they are aimed at improving the supply and demand for labor.

Special measures are envisaged to improve the position of women, youth, persons with disabilities, beneficiaries of financial social assistance, as well as Roma men and women, having in mind their representation and other characteristics that indicate an unfavorable position on the labor market.

The focus will, as it is stated, be on other vulnerable categories of the unemployed, who cannot improve their position on the labor market on their own without additional and intensive support in finding a job.

At the session, a decision was made on financing the purchase of textbooks from the budget of the Republic of Serbia, which provides free textbooks and other teaching aids for primary school students from socially disadvantaged families, for students who receive primary education and upbringing according to individual education plan, as well as for students with developmental disabilities and disabilities who carry out educational work according to an individual educational plan.

Free textbooks are also provided for students who need adapted teaching aids (enlarged font, Braille, electronic format), as well as for students who are the third in the family or every next born child in the school system.

At the session, the Government also gave its consent for the opening of the Consulate General of Bosnia and Herzegovina in the Republic of Serbia, with its headquarters in Novi Pazar.

Theft of 2.1 million euros from the state, learned the amount of money found so far