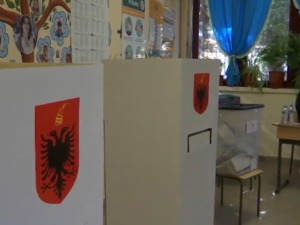 According to the first estimates, the Socialist Party of Edi Rama received 46.9 percent, and the Democratic Party of Ljuljzim Basha 43.5 percent of the votes.

The Socialist Movement for Integration of Ilir Meta won 6.9 percent of the votes, according to the first exit polls, Reuters reports.

Conflict at the polling station at the school

The commissioners of the two political parties clashed this morning at the polling station in the school in the village of Lekbibaj, reports the Panorama portal.

Police allege that three brothers threatened with a gun, as well as that they hit citizen A. with hard objects. N., a representative of another political entity.

It is also stated that the three of them damaged and destroyed the property of this school, as well as that they did not obey the order of the police officer.

Scenes from the election campaign were not repeated when several were wounded in Kavaja, and in Elbasan, one person was killed and five wounded, supporters and sympathizers of the two strongest and mutually opposed parties in Albania – the Socialist and Democratic Parties.

Not everybody will be in IT, when selecting a occupation, a very…

The leaders of those parties, Edi Rama and Ljuljzim Basha, unconvincingly denied that members of their parties were killed and wounded, wanting, above all, to calm the passions among the voters.

They seem to have succeeded in that. In a calm atmosphere, with minor incidents, such as painting, the seizure of already rounded ballots and conflicts between members of polling stations, about 3.6 million voters were free to go to the polls.

The messages of the leaders of the two largest political blocs are that democracy should win. Edi Rama has been prime minister for the last two terms, and Ljuljzim Bashe is just as much waiting to win.

“Today is the day not to spread a negative impression towards anyone who expresses a different opinion with their voice. We are one big family in the same homeland and no one should forget that democracy is a sport in which everyone should go out on the field and shoot with their voice. And in the end, the best will win, “Edi Rama said.

For the first time, one Albanian party from Kosovo is participating in the elections in Albania – the Self-Determination movement. The leader of the movement and the Prime Minister of Kosovo, Albin Kurti, voted as a citizen of Albania.

“I congratulate and wish as many better days as possible for Albania and everyone as well as for me who has a passport of the Republic of Albania,” said Kurti.

“I can’t understand what this is about. On the one hand, everyone in Kosovo is complaining about the interference of Serbia or its President Aleksandar Vučić, but on the other hand we see that the Kosovo Prime Minister is even voting in Albania. It is not acceptable. At least not for me.” ,, EP rapporteur for Kosovo Viola von Cramon commented on Twitter.

That will be another challenge for the one who wins in Albania today. In addition to the fight against the spread of the pandemic, unemployment, and economic recovery, he will also have to tame Kurti’s political ambitions. In this or the next election, it doesn’t matter. Kurti wants more from Kosovo.

3.6 million citizens had the right to vote, although Albania has a population of 2.8 million. Albanians living in other countries could also vote.

With 20 million euros spent, these elections are by far the most expensive elections in the history of multi-party politics in Albania.

This is the special meaning of the name of the daughter of Arbenita and Feros!

Haziri shows the situation with COVID-19 in Gjilan – Latest News

Atlanta outclassed Phoenix, Bogdanović one of the upbeat