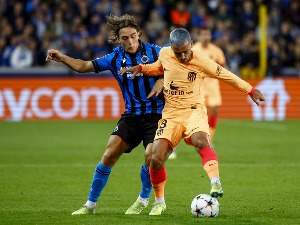 Club Brugge made a surprise victory over Atletico Madrid 2:0. After three games, the team from Belgium knows only about victories and sovereignly holds the first place in group B.

Kamal Sova opened the scoring for Madrid in the 36th minute, and Ferran Jutgla doubled the home team’s advantage and set the final score in the 62nd minute of the game.

In the 76th minute, Griezmann had a chance to reduce his team’s deficit from the penalty spot, but he hit the crossbar, and then only a minute later scored a goal that was disallowed for offside.

An unusual situation was seen towards the end of the first half – Mehdi Taremi crowned a good counter-attack, but after the reaction from the VAR room, the goal was canceled because one of Porto’s players previously played with his hand in his penalty area, so instead of a goal on one goal, a penalty kick was awarded on the other side of the field.

Patrik Schick shot from the penalty spot, but the goalkeeper of the Portuguese team, Diogo Costa, made a save and after 45 minutes of play it remained 0:0.

Zaidu Sanusi put Porto in the lead in the 69th minute, and the final score was set by Galeno three minutes before the end of the game.

Just a minute after conceding the second goal, Leverkusen were down a player as Jeremy Frimpong earned a second yellow card.

Behind Bruges, who are convincingly first in Group B with nine points, all three teams now have three points each.