Tottenham and Metropolis to factors after the turnaround 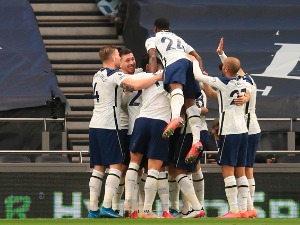 Tottenham welcomed the “saints” in the first match since Jose Mourinho left the club.

Ryan Mason is a temporary solution, and the youngest coach in the history of the Premier League made his debut with a victory.

Dani Ings gave the guests the advantage in the 30th minute, but Tottenham turned it around in the continuation.

Gareth Bale equalized for Tottenham in the 60th minute, who played without Harry Kane.

Son finished the great action of the home team with a goal by Son in the 75th minute, but the goal was annulled due to the offside in which Lukas Moura was, who was between the goalkeeper and Son.

However, Tottenham smiled with luck in the end, as Son brought victory to the host from the penalty spot in the 90th minute.

Villa took the lead from the first attack, after about twenty seconds. The shooter was McGinn.

The “citizens” immediately attacked with all their might, and they equalized through Foden in the 22nd minute.

Rodri brought a turnaround in the 40th minute, and before going on vacation, Stones received a direct red card.

However, Cash made things easier for the guests, who received two yellow cards in three minutes, so he was sent off in the 57th minute.

His mother celebrates his birthday, this is how Mevlani wishes him