Vučić opened the plant of the corporate “Regent” in Svilajnac 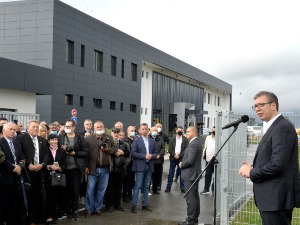 The President previously visited the plant and greeted the workers from Svilajnac, Kragujevac, Jagodina and other places from the Sumadija and Pomoravlje districts who work in that factory, and wished them happy work.

He said that Serbia needs more such factories as “Regent”, which employ between 100 and 300 people.

Vučić was told that students from the dual education system also started working in that factory, and he said that Serbia must continue to encourage dual education, because it brings results.

He stated that Serbia has great support from Swiss, German and Austrian partners.

The opening of the company is also attended by the leaders of “Regent”, the ambassador of Switzerland to Serbia, Urs Schmid, and the president of the municipality of Svilajnac, Predrag Milanović.

Regent Lighting is a Swiss company, based in Basel, which manufactures industrial lighting and operates in the Svilajnac Free Zone. The company has been operating in Svilajnac since the spring of 2020 in a leased space of 1,000 square meters with about thirty employees.

A new factory with an area of ​​about 6,500 square meters was built as part of the first phase of the construction of “Regent’s” plants, while the plan is to build another hall with an additional 6,000 square meters in the second phase.

The executive director of the company, Jerg Steimayer, announced that he would invest four million euros in the first four years of business in Svilajnac.

“Regent” currently employs more than 80 workers in Svilajnac, and the plan is to employ more than 250 workers after the completion of the second phase of investment.

Vučić announced the construction of a bypass with two bridges

The President announced in Svilajnac that the construction of a bypass with two bridges over Resava and Morava will start very soon, which will not cost less than 25 and maybe 25 million euros, but, he said, will mean a lot for all municipalities in the vicinity of Svilajnac. , even for Jagodina.

After that, Svilajnac will look different, the president told the gathered citizens.

“We are far from Switzerland, but we have to work and get closer to it, together we can do a lot and that is the only way Serbia can move forward,” Vucic said.

Vučić pointed out that something of everything announced will be built this year, and something in the shortest possible time next year.

“We renovated and built more of that, and when we finish that, we will talk about higher salaries, pensions and how to return our people to their homes, because they will be able to live from decent work here as well,” Vucic pointed out.

He called on the citizens to help in that, because, as he said, we do everything we do for us, but also for our children.

The renovation of many temples will continue, some of which have already been renovated, and the elementary school “Jovan Jovanović Zmaj” is the last in this area to be renovated.

The President thanked the citizens of Svilajnac for their support and for understanding that all this requires work, effort and energy.

I Got a ‘Mild’ Breakthrough Case. Here’s What I Wish I’d Known.

Ask KHN-PolitiFact: Is My Cloth Mask Good Enough to Face the Delta Variant?